Gilgamesh by Anonymous
My rating: 5 of 5 stars

”The one who saw the abyss I will make the land know;
Of him who knew all, let me tell the whole story
...in the same way...

From the day of his birth Gilgamesh was called by name.” 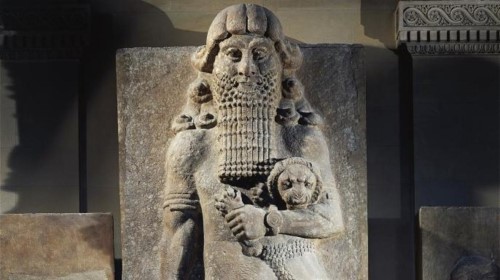 An exorcist priest named Sin-Leqi-Unninni is famous for being the scribe who recorded the best preserved version of the Epic of Gilgamesh. He lived in Mesopotamia between 1300-11oo BC. His name translates roughly as The Moon God is One Who Accepts my Prayers. The poem is thought to have existed as much as a 1000 years before Sin-Leqi-Unninni transcribed this version, which would make this story over 4000 years old.

It is remarkable that we have these clay tablets at all. We have pieces of the story in other forms, and any translator who takes on the task of looking with fresh eyes at these cuneiform shapes relies heavily on the other scattered pieces to fill in the gaps of the missing sections of clay or the parts that have been rubbed into obscurity. 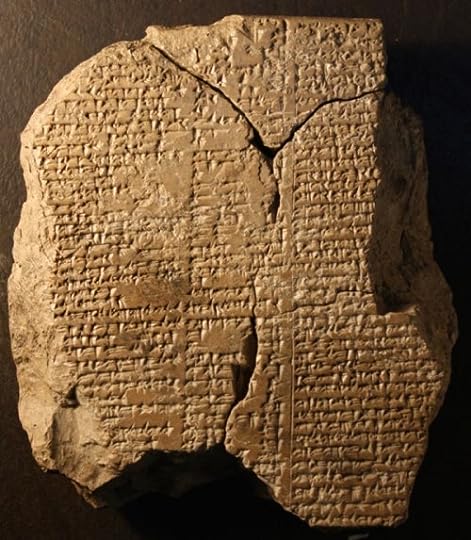 Here is an example of what is readable out of the severely damaged tablet V column VI:

It makes me think of when I was a kid watching a show, and the TV signal would start going on the fritz. The picture would start flipping and turning to static (probably a passing low flying UFO). I would be banging on the set (because that always helps) and frantically wiggling the ears until the rabbit is squawking. I’d get pieces of sound with distorted dialogue. Finally, the signal would be reacquired just in time for me to hear,

“That was amazing, Magnum.”

Fortunately, John Gardner and John Maier were able to resurrect the missing pieces from other sources, and they share that with us so we can see what we probably missed. It would have been wonderful to read how Sin-Leqi-Unninni would have interpreted that particular dynamic scene of Gilgamesh and Enkidu subduing Humbaba. One can only hope that more Gilgamesh pieces are still out there to be discovered and maybe, even possibly, another copy of this particular translation.

When I think of Gilgamesh, I also think of Beowulf. Both are epic, larger than life heroes whom I frequently, in my youth, mixed up. It wasn’t until I was at college, taking literature courses, that I managed to pry the two apart into two separate beings.

Who would win? Well, Gilgamesh is two thirds celestial being and only one third human. When Enkidu is created as a counter balance to him by the Gods, it really isn’t a contest. Despite Enkidu being a powerful and great warrior, he is no match for Gilgamesh, so I’d have to say my head proclaims Gilgamesh would win against Beowulf, but my heart is always going to be with Beowulf.

Enkidu is raised by wolves, well basically the whole wildlife kingdom, and when it is time for him to give Gilgamesh his comeuppance, they decide the best way to bring Enkidu into the arms of civilization is to tempt him with the charms of a woman.

Here he is, courtesan; get ready to embrace him.
Open your legs, show him your beauty.
Do not hold back, take his wind away.
Seeing you, he will come near.
Strip off your clothes so he can mount you.
Make him know, this-man-as-he-was, what a woman is.
His beasts who grew up in his wilderness will turn from him.
He will press his body over your wildness.”

And man, did it ever work. It is like mainlining the poor bastard with some pure China White. He is hooked. ”Six days and seven nights Enkidu attacked, fucked the priestess.” Though this might resemble a honeymoon, never leave the hotel type situation, I doubt it was quite the same.

Enkido and Gilgamesh, after their property destroying epic battle, became best friends. Inseparable until death parts them. They kill the Bull of Heaven after the beast is sent for by the scorned goddess Ishtar.

You see, Gilgamesh turns her down.

which is actually very astute of Gilgamesh, who is really better known as a love them and leave them type. There is, in fact, a lot of grumbling about his Middle Ages type insistence that he has firsties with any new bride in the kingdom. I guess the rat bastard aristocracy of the Medieval period had read a copy of Gilgamesh, or maybe we can assume that men with absolute power have always been the same. 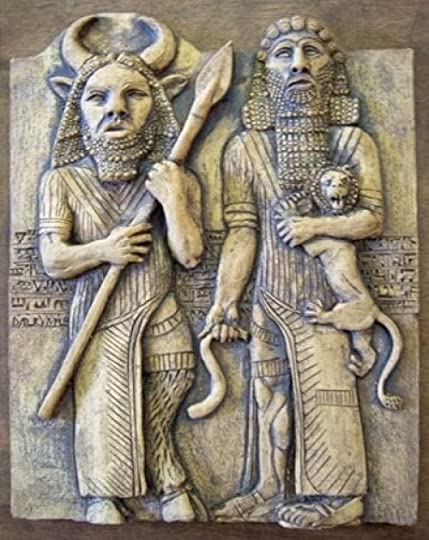 There must be a price paid for killing the Bull of Heaven, and the Gods are not going to strike down their golden boy, Gilgamesh, so that leaves his best friend, Enkido, to be the fall guy. When you are on an away mission with Gilgamesh, you always wear the red shirt.

The grief that Gilgamesh feels is actually poignant.

”Six days and seven nights I wept over him.
until a worm fell out of his nose.
Then I was afraid.”

I really think that maybe Gilgamesh hopes the gods will take pity on him and listen to his lamentations and restore life to Enkidu, but my rule has always been, when a worm falls out of a loved one’s nose, it is time to bury him or run like hell because Uncle Ted has just joined the Walking Dead.

Gilgamesh travels to the underworld looking for his friend. I love this line: ”His face was like that of one who travels a long road.” I can see his mental and physical pain etched into the lines of his face.

There is a long digression in the story while Sin-Leqi-Unninni relates THE FLOOD story, starring Utnapishtim as Noah. The rest of the starring characters, that would be us sinners, are drowned. We are merely bobbing nuisances in the water, as a backdrop to Utnapishtim’s celebratory high 5s with the giraffes, gorillas, and gazelles.

Though nonsensical for Sin-Leqi-Unninni to shove Gilgamesh off center stage, it is actually very interesting to read.

”When he orders bread at night, he (Shamash) will rain down wheat,
enter the boat and close the gate.”

My family raises a lot of wheat, so the whole image of raining down wheat to feed Utnapishtim and his family is something I have never heard of in connection with the Noah version, but I really like the visual of wheat cascading from heaven to fill up the deck of the boat.

On his journey, Gilgamesh finds a weed that will restore his vigor and youthfulness. He wants to take it back to Uruk and share it with others. I’m already thinking to myself, gobble it down man, save some for others, but gobble yours now.

Well, then a snake shows up, and …

This is a blast to read. The notes that Gardner and Maier provide are invaluable to help me better understand the story, so don’t just read Gilgamesh, allow yourself to be immersed in the whole experience. I would read the text from the tablet and then read the notes to find some, not so subtle, changes occurring to my own interpretation of the meaning. Use these experts to heighten not only your knowledge but also your overall enjoyment of reading one of the oldest known stories in existence. 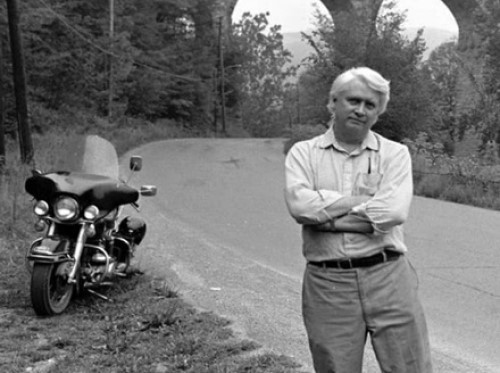 I keep pondering the unexpected death of John Gardner in 1982. He died in a tragic motorcycle accident at the tender age of 49, before this book was published. I couldn’t help thinking of him because the notes are infused with his charismatic personality and his boyish enthusiasm. He had been drinking but was below the legal limit at the time. John Maier feels that he was overworked from too many projects and too little sleep. I first encountered Gardner when I read his wonderful, slender volume Grendel (1971), which I really need to reread so I can write a review for it. I didn’t know that he was already dead at the time that I read Grendel, but when I did find it out later, I felt that temporary displacement of learning bad news as if it had just happened. RIP John Gardner. May you be able to complete your tasks in the next life.

Posted by JEFFREYKEETEN at 12:08 PM