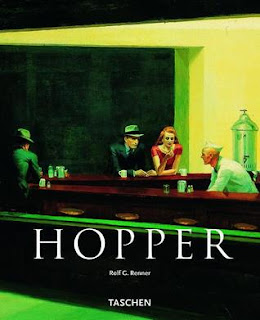 Edward Hopper (1882-1967) is considered the first significant American painter in 20th-century art. After decades of patient work, Hopper enjoyed a success and popularity that since the 1950s has continually grown. In canvas after canvas he painted the loneliness of big-city people. Many of Hopper's pictures represent views of streets and roads, rooftops, and abandoned houses, depicted in a brilliant light that strangely belies the melancholy mood of the scenes. Hopper's paintings are marked by striking juxtapositions of colour, and by the clear contours with which the figures are demarcated from their surroundings. His extremely precise focus on the theme of modern men and women in the natural and man-made environment sometimes lends his pictures a mood of eerie disquiet. On the other hand, Hopper's renderings of rocky landscapes in warm brown hues, or his depictions of the seacoast, exude an unusual tranquillity that reveals another, more optimistic side of his character.

“His framing crops in ways that stimulate and frustrate attention, sometimes suggesting movement and change while fixing the subject so firmly that his best works appear like freezed frames from a lifelong movie. Hopper’s viewpoints, framing, and lighting frequently appropriate movie and theater conventions.”― Brian O'Doherty

I was thrilled to be taking an Art History class at the same time there was an Edward Hopper exhibit at Boston’s Museum of Fine Arts. The museum was extremely crowded that day and I was with my classmates and instructor on a field trip that was not focused on any one artist, so it was difficult for me to truly contemplate his work. Unfortunately, the exhibit was over the same by the time I was able to make a solitary trip there.

So I was happy to find this book at the library to revisit the works I saw in Boston and discover his lesser known paintings and etchings.

I love the vivid and unsentimental portrayals of American urban and rural life, the serious and melancholy mood of his characters, and their environment.

“Maybe I am not very human. What I wanted to do was to paint sunlight on the side of a house.”
– Edward Hopper

Renner thoughtfully analyzed the artist’s style, techniques and influences. At the end is a brief biography of the artist.

I wish the book was a little larger, so I could fully appreciate Hopper’s magnificent works, but I also liked the smaller size that made it easy to carry around and snatch reading time throughout the day.
Posted by Nancy at 8:17 PM