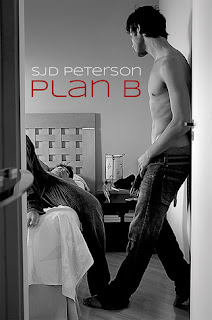 S.J.D. Peterson
Dreamspinner Press
Reviewed by Nancy
5 out of 5 stars

Danny Marshal has always lived his life out loud, but his androgynous appearance is only a small part of who he is. One night at a frat party, Danny meets Lance Lenard, football jock and apparent straight guy. Lance is shocked when he's immediately attracted to Danny's feminine side. Danny is happy to be the subject of Lance's first man-on-man experiment—until Lance begins to struggle with the fact that despite his appearance, Danny is indeed a man.

Lance's whole life has been focused on his goal of playing in the NFL, and he knows those dreams will be smashed if anyone finds out about his little secret. Although Lance has come to hunger for Danny's touch, he's not willing to give Danny what he's grown to crave: a boyfriend who's proud to love him for every flamboyant and snarky cell in his body.

Life sends Danny and Lance in different directions, each of them focused on his respective Plan A. But the best-laid plans of mice and men often go awry.

Danny is such a girl:

“I grabbed my new white, waist-length coat with black fur trim around the hood and slipped it on. Yes, I’d bought it in the junior girls’ section and I fucking loved it. All soft and snuggly. Loved the way the fur felt around my face when I put up the hood. I’m a very tactile, as well as visual, guy.”

But there’s no question he’s all man:

“Sure, I took some ribbing for it, a few nasty insults tossed my way here and there when I walked by, even had some old guy ask me if I was a boy or girl. I answered by cupping the bulge in my pink skinny jeans and asking, “Would you like me to show you?””


After my disappointing experience with The Girl For Me, I was a little worried that I wouldn’t enjoy this story. There were lots of similarities in the plot, even in the main character’s name. It turns out my worries were unfounded. This story was told beautifully, with lots of humor and heart. Right from the beginning, I fell in love with Danny.

Danny is a busy theater major who doesn’t do relationships. He has big plans for the future, and no time for anything more than casual encounters. That all changes when he attends a frat party with his best friend, Bo, and is captivated by the rugged and muscular Lance, whose goal is to be a big football star.

Though Lance is very attracted to Danny, he sure has a funny way of showing it. He behaved terribly at the party and I’ll admit I didn’t like the way he treated Danny in the beginning. But Danny’s no pushover and he gave as good as he got. I love their relationship buildup and Lance’s conflicting feelings. He’s deep in the closet and not yet ready to take the next step in their relationship. It’s too late for Danny, as his heart is now involved.

Both men are young, selfish, and wildly immature at times. They make decisions hastily which creates a lot of unnecessary turmoil in their relationship, but what can you expect from 21-year-old college students? Since this story was told from Danny’s perspective, I could feel his emotions keenly, reminding me of the confusion and chaos of my own young life. I loved Danny and Lance, Bo and his girlfriend, Katie, and all the fully developed colorful supporting characters. The tense, heartbreaking and sad moments made the ending so sweet and satisfying. This story was a joy to read.
Posted by Nancy at 9:09 PM