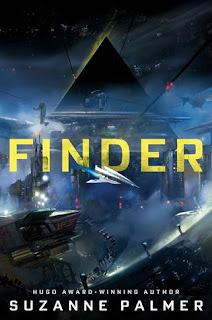 "Finder" by Suzanne Palmer is a terrific space opera adventure with a very likable main protagonist, an involved three dimensional war and aliens. Some might think the novel is overstuffed (and it is), but Palmer pulls it off by keeping the story moving, the situations fresh and the characterizations true and clear. Light and breezy, full of likable characters and chicanery. It’s a con, it’s a reverse heist, it’s a war and it’s got alien contact and alien meddling. But it’s a big fun read and that is its why it should be on your list.


There are two main parts to the novel.


Arum Gilger, is a crime lord who has carved out a position of power in a deep space harvesting system colloquially called Cernee, which is loosely run by an appointed Governor. Palmer has populated the small space area with colorful habitats including “Leakytown”, the “Wheels”, “Blackcans” and “Halo”, which soon feel like part of our world and with a bunch of oddball inhabitants that cannot abide with the central government. The system has three main powers - the Vann family, a family of female clones who are lichen farmers, Harcourt a smuggler and tycoon, who is ably assisted by Bale, and Gilger, who has designs to run the system. Gilger's evil henchman is Borr Graff, a member of the fanatical Faither clan, who hate clones. Harcourt, cannot move against Gilger directly because Gilger has threatened Harcourt's daughter, who is at school on Mars. The main station between the various habitats is Central, which is connected to the other habitats. Gilger, however, has stolen a sentient spaceship from the Shipmakers of Pluto and now has more power to force the issue and take control of the system.


Dropping into this shaky system is Fergus Ferguson, a conniver and an irrepressible "repo man" from Earth, who has been hired by the Shipmakers of Pluto to recover the Venetia's Sword, the stolen sentient starship. After a run in with Gilger's forces, who attack Mother Vann, the matriarch of the Vann family and Ferguson at Central, Ferguson tells the family that he is there to reclaim the ship which will hurt Gilger's operation. Fergus will also get help from Mari, one of the younger Vanns


As part of his elaborate con to steal back Venetia’s Sword, Fergus will pose as Mr. Anders, the head of a fake technological firm and "invent" a device to read light waves to see what happened in the past, as a way of showing who orchestrated the attack on Mother Vann. The scheme is designed to make Gilger move the Venetia's Sword so as to block the device. And to get past the sentry drones and mines protecting the ship from theft, Palmer laughingly has Fergus manipulate "sex toys" and tennis balls and use them to destroy the drones. The scene to take control of the Venitia’s Sword is some really good reading. And Fergus shows yet again his smarts and willingness to take risks.


It seems the Asiig have morals about who to help and who not.


The second half of the novel involves Fergus and Mari’s efforts to help the Vanns, Harcourt and the other inhabitants of the system after he has been “altered” by the Asiig and to thwart Gilger. There will be a trip to Mars where Fergus and Mari has to find Harcourt’s daughter before Gilger’s goons harm her. Fergus past during the Mars rebellion will come in handy and so will Fergus’s power to zap people from the changes that he received from the Asiig. Like I said the novel is a little overstuffed.


Space opera seems to be making a big push back against the fantasy dominated shelves of the local bookstore, and this novel is at the spear head of this new wave of space based novels. The biggest issue I have with the novel is its length. Its not a page thing. Its just when you think the action is over, some new item rears up, but it is such a fast read that each episode only adds to the overall story. So while I think the whole Mars part of the story was not completely necessary, it helps Fergus to discover what was done to him and ties off other loose ends. Plus it give us a respite from the actions around Cernee.


In the end, Fergus will return to Cernee with Bale and Mari to return the fight to Gilger and to take back the Venetia's Sword which is still stuck in Cernee space. It will be bloody and hard but a lot of good scenes.


Suzanne Palmer’s debut novel may have a few flaws but she has invented a world, system and characters that are well worth visiting.
Posted by Jeffrey Wendler at 5:53 PM