The Greatest Knight: The Remarkable Life of William Marshal, The Power Behind Five English Thrones

The Greatest Knight: The Remarkable Life of William Marshal, The Power Behind Five English Thrones by Thomas Asbridge
My rating: 5 of 5 stars

”In 1152 King Stephen of England decided to execute a five-year-old boy. This child--William Marshal--had committed no crime. He was a hostage, given over to the crown as surety for his father’s word, a pawn in the great game of power and politics then being played out within a realm wracked by civil war. When William’s father promptly broke his pledge to the king, declaring that ‘he did not care about the child, since he still had the anvils and hammers to forge even finer ones,’ Stephen was furious.” 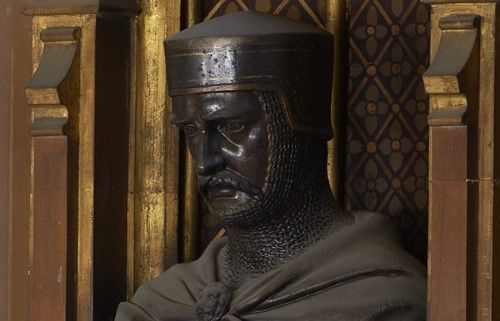 In his fury, Stephen sent the boy Marshal to the gallows. On the way, William asked the soldier leading him to his fate if he could play with his spear. The spell of Stephen’s fury was broken by this display of childish curiosity. He realized in that moment that, though he could place the blame of the boy’s death on John Marshal’s obstinate refusal to comply, the sin of the death of such an innocent would stain him forever, and he, by instigating an English Civil War, already had enough stains for one lifetime. Stephen had little idea that he was saving the man who would one day be regarded as the greatest knight that England has ever produced.

There was an interesting parallel with the 70 year old William Marshal in 1216, and the 5 year old in 1152. He had beaten incredible odds to rise to being the most famed Earl in all of England. When he was asked by a dying King John, a man he couldn’t help but loath, to preserve the crown for his eight year old heir Henry III, Marshal couldn’t refuse. The odds against holding off Louis of France with the remains of the battered Royal army were slim. It would have made more sense, after weighing those odds, that William would have spirited the boy away somewhere safe (Ireland?) and prepared to make terms with the French to better his own advantage. I couldn’t help but think that the defenseless boy of five was still inside him, staring through those aging warrior eyes at this helpless boy of eight.

History was changed the moment William decided to uphold Henry’s right to the crown. One man stood in the way of what many thought was the inevitability of French rule. At 70, he led the charge into the decisive Battle of Lincoln that saved the Angevin dynasty. There wasn’t another man in the kingdom who could have inspired the wavering Royal army and convinced them that victory could still be theirs. 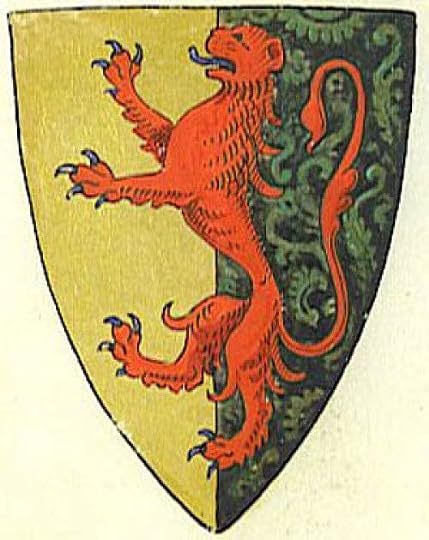 If you saw this shield coming at you on the battlefield, you had best have your affairs in order or turn tail and run to live to fight another day.

Of course, a lot of things happened to Marshal between the ages of 5 and 70. He quickly became one of the most trusted knights in the kingdom, and so it only made sense that Henry II would assign Marshal to his oldest son, Young Henry. I could almost hear the conversation...make a man of him. The 12th century was so fascinating because this dynamic ruling family, full of strong personalities, was constantly jockeying between themselves for power. The sons were impatient to share power with their father, and this anxiousness led to more than just squabbles at the dinner table, but evolved into outright war. Eleanor of Aquitaine, one of the most intelligent and powerful women of any century, also battled with her husband and usually favored her sons over her husband. With many royal dynasties struggling to produce heirs (the later Tudors were particularly unfruitful), Henry had produced four boys, and all of them were chips off the old block, intent on asserting their rights most forcibly to receive more favor from their father. William found himself carefully picking his way through this political minefield. One misstep and all that he had obtained for his family would be lost.

As impressive as William was on the battlefield, I found his political astuteness even more spectacular. Being too supportive of one family member might have spelled doom for him when the inevitable power shift occurred. He unhorsed Richard at one point in protection of Richard’s father, Henry II. The only man to ever do so against Richard the Lionheart. When Richard came to the throne, it could have been the end of William Marshal, but Richard had too much respect for him as a warrior and as a statesman to let an old grudge stand between them. Later when Richard was away on crusade, William Marshal was tasked with keeping the youngest brother, John, in check. He gave John enough rope to let him play at ruling the kingdom, but not enough to allow him to hang himself by outright treason against Richard. William realized that there was a good possibility that John would one day be King, and he did not want to antagonize him, nor did he want to disappoint Richard.

The Plantagents were often referred to as the Bloody Dynasty, and these were early days in their rule. There were many more family disagreements soon to come. The War of the Roses made a bloody ruling family bloodier. A case could be made that the very thing that should have made the Plantagents strong, fruitful loins, might actually have ultimately lead to their downfall.

At 43, William Marshal finally married the 17 year old Isabel de Clare, the daughter and only heir of Richard de Clare, Earl of Pembroke, known as Strongbow. William went from a landless knight to one of the richest men in the kingdom overnight. He had passed on several other opportunities to marry young women of property, which at the time I thought...what are you doing, man? I should have known that he had his eyes on a greater prize...the fertile lands of Ireland. They had ten children together so, though it was an arranged marriage, basically Isabel was the prize sold off to a valued ally, the marriage by all accounts seemed to be one based on mutual respect, and dare I say...love. 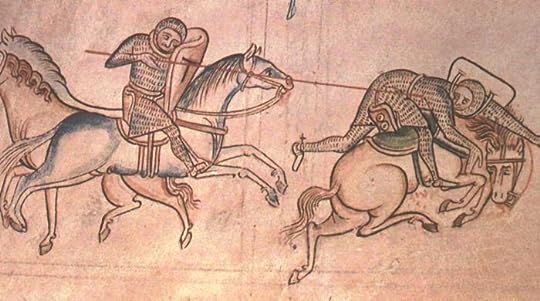 We might not have ever known the story of William Marshal except for the French bibliophile named Paul Meyer who attended a Sotheby’s auction in London in 1861 and saw a rare medieval manuscript of the life of William Marshal. He could not compete in the bidding with the wealthy, rather insane collector Sir Thomas Phillipps, who ended up buying the manuscript. It became buried in his vast collection and could have been lost forever except that twenty years later Meyer, still obsessed with what he had seen of the manuscript, was granted access to the Phillipps library to try and find it.

Thomas Asbridge has given us a very readable version of Marshal’s life, drawing heavily on the medieval manuscript, but also finding some confirmation of some of the assertions from other sources, such as the Anglo Saxon Chronicles. The manuscript was the first written account of a medieval knight, and this important relic inspired Asbridge to do his best to clear away the cobwebs and unravel the myths surrounding William Marshal and those he served.

Posted by JEFFREYKEETEN at 11:21 AM