Alan Banks Is After a Very Bad Boy... 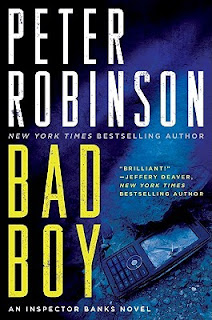 
[Please note: This review contains some minor spoilers, but nothing beyond what is described in the tease on the back of the book.]

Bad Boy is a book that, had it been set in the U.S. instead of in the U.K. would have ended on page three.

A woman comes into the Eastvale police station, looking for DCI Alan Banks who was once her neighbor. The woman's daughter has come home for a visit and while cleaning the daughter's room, the woman discovers a hand gun hidden away. Being a good citizen, she races to the police station to report it, apparently hoping that Banks can safely get the gun out of the house and minimize the legal trouble her daughter will be in for having it in the first place.

In the U.S., of course, the desk sergeant would doubtless just tell the woman to go home and to stop trampling all over her daughter's Second Amendment rights. In the U.K., they take this sort of thing more seriously and, although the woman doesn't know it, her daughter could be facing five years in the slammer for possessing the gun.

Unfortunately for the woman, her old friend Banks is on holiday in America and so the woman is referred to Banks' colleague, Annie Cabbot. Following protocol, the police send a SWAT team to the house to remove the weapon, but things go badly wrong and a tragedy ensues.

Erin, the young woman who brought the gun to her mother's house, is the roomate of Banks' daughter, Tracy. Erin and Tracy are both attracted to a sexy Bad Boy named Jaff who owned the gun in the first place. As events unfold, Tracy realizes that Jaff could be in serious trouble and so goes to warn him. Knowing that her father is going to be out of town for the better part of a week yet, she then volunteers that the two of them could lay low in her father's vacant cottage for a while.

This is a seriously bad idea, but Tracy, who is obviously not the brightest woman on the planet, won't realize that until it's too late. By the time Banks returns, Jaff will be on the run, taking Tracy as his hostage. Lots of bad things are going to happen along the way and Banks will face one of the most difficult and most personal challenges of his long career.

This was a good read, and the story moves right along, but I did have a couple of problems with it. First of all, this is an Alan Banks story in which Alan Banks is basically AWOL for the first half of the book. By the time he arrives back in the UK, his daughter is on the run with a known criminal and yet his superiors still allow him to work the case. That stretches credulity a bit when he has such a personal stake in the situation.

Also, as a person of the male persuasion, I might find it harder than some other readers to really appreciate the attraction that some women have for dangerous "Bad Boys." I understand the concept, but Tracy's actions in the beginning of the story simply left me shaking my head. I had some difficulty feeling much sympathy for her later in the book when she had so stupidly gotten herself into this situation to begin with.

One minor note that jarred me and took me out of the story for a moment: While vacationing in San Francisco, Banks begins reading Dashiell Hammett's classic book, The Maltese Falcon, which takes place there. Later, he flies from San Francisco to the UK and on arriving notes that he continued to read the book on the flight," until his eyes got too tired" to continue.

Say, what? The Maltese Falcon is 229 pages long and a non-stop flight from San Francisco to Heathrow is ten and a half hours. Plus, he'd already started the book! Banks must be the slowest reader on the planet.

A final note: The moral of this story is, obviously, that once your kids are grown and have left home, change the locks and, NEVER, under any circumstances, give them a key to your house.
Posted by James L. Thane at 2:00 PM