Up Jumped the Devil 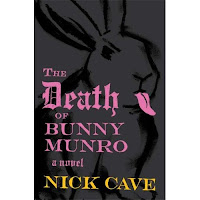 The Death of Bunny Munro
Nick Cave
Faber and Faber, 2009
Anthony Vacca's rating: 4 out of 5 stars

I am conflicted. On one hand, Nick Cave is one of my top ten favorite musicians. For over thirty years he has consistently made some of the best emotionally and physically visceral music ever to come tearing, and sometimes aching, its way of the electric shiver of a set of speakers. The man can sing about capital letter Love in a way that will turn any person equipped with something resembling a heart into a believer; but he can also thrash and foam like a maniac about the erotic bliss of banal and lowercased murder. Age has not tempered the man. He can do the arena rock (There She Goes My Beautiful World), and then turn around and throw a dirty old man punk rock boogie your way (No Pussy Blues), and then stick his tongue firmly in cheek and strut his way through a playful poke and prod at a bible story favorite (Dig Lazarus, Dig). What I am saying here is that the man is versatile, confident, and staggeringly literate in his ability to craft a hell of a song. The same is true in every way about Nick Cave’s approach to writing a novel.

And here comes the conflict: as much as I love Nick Cave’s music, having finished reading this, his second novel (twenty years later after And the Ass Saw the Angel I am left wondering how many wonderful novels we could have had from the man if his calling had been that of a novelist first instead of a musician. Because, yeah, The Death of Bunny Munro is a wonderful book. It’s disturbing, tender, articulate, funny, monstrous, profane, humane, and everything else I could ever ask for from a single book.

Bunny Munro (could this be a respectful nod to the then recently departed John Updike and his own great creation of Harry "Rabbit" Angstrom?) is damned. We know this from the first sentence on. And we also know, even if Bunny’s own self-awareness fails him on about all fronts imaginable, that there is no one to blame for Bunny’s fate except himself. His problem is not that he is married to a long-suffering, and emotionally-disturbed wife or that he has a precocious and loyal little son charmingly named Bunny Jr.; Bunny’s problem is that he can’t stop trying to fuck anything with a vagina even if it is at the expense of everything he should hold dear.

I saw the film Shame last year, which was a powerful rumination on sexual addiction and what exactly it means to be a human being that interacts and forms relationships with others, and let me tell you this: I like sex as much as the next sane, non-repressed person, but living a life resembling anything like the shit that Michael Fassbender’s character from the aforementioned flick or that Bunny Munro goes through…well, there’s a reason why I just used the word shit.

Bunny will gladly tell you that his favorite thing in the whole wide world is a woman’s vagina: any and all vaginas. He wants to be inside them all. This is why in the first chapter of the book we find Bunny sitting in a sleazy motel room with a black hooker while he tries to talk his wife down out of a panic attack on the phone. She wants her husband to come home, but Bunny tells her he can’t because he is still out on the road selling his company’s beauty products from door to door. This is what we call a lie, because Bunny is only a few miles away from his home where his wife gets calls about Bunny’s dying father and there’s the sound of a thousand birds fleeing a burning peer right outside her window that’s driving her insane. Bunny promises his wife he will be home early in the morning, but it is late in the afternoon by the time he finally does; after he fucks a random waitress, of course.

This is the kind of man Bunny Munro is.

After a series of misfortunate events, the novel really gets rollicking when we find Bunny back on the road once more, selling his cosmetic wares all over Brighton (that’s in England) with little Bunny Jr. in tow. If I had to describe the plot of this novel then I would have to say here that it is a road-trip novel about fathers and sons. But that makes it sound so pedestrian and there is nothing ever somewhat resembling that word when it comes to something Nick Cave has created.

For one, Nick Cave weaves an encroaching apocalyptic funk throughout the novel by constantly reminding Bunny and the reader of a maniac who is terrorizing public spaces, his body painted red and horns jutting out of his skull. This is far from being just a prank because the bodies of women are starting to turn up, their bodies ripped to pieces by a pitchfork. No matter where Bunny goes he can’t escape seeing news coverage of the madman on TVs and in newspapers. He does his best to ignore the news story and the sense of dread it is welling up inside him, but he can’t help but notice that the killings are getting closer and closer to Brighton. And Bunny knows that the killings are coming home to him.

Also, Bunny is fairly certain that a ghost is haunting his every movement.

But it is hard to feel too sorry for Bunny, because he is constantly at his worst behavior. As he and Bunny Jr. drive around all day, spending nights at cheap motels and having every meal in fast food joints just as ubiquitous, we see just exactly how shitty a dad the man is. He leaves his kid in the car for hours while he goes to visit the homes of women whose names are on his list of interested customers, and when he is not trying to hawk his ridiculous sounding creams and ointments, he is seeing if maybe he can talk whatever women is in front of him into a quick screw. Because this is how Bunny sees women (and I do mean any and all women): they are vaginas with some immediate potential to be entered. It does not matter how old or unattractive a woman is, when Bunny sees them he is immediately thinking of them in terms of fucking. This does make for a lot linguistic feats on the part of the author, as he thinks up another colorful expression or play on words to talk about Bunny and his nearly constant erection.

In fact, it is the humor that saves this book from being utterly harrowing (and it is plenty enough harrowing, still). Cave does a similar trick like Martin Amis, in that, he is constantly placing Bunny in absurd and humiliating situations that the character completely deserves. One of the funniest running gags in this book (and one which Cave apologizes for in the afterward of the novel) is Bunny’s obsession with the singer Avril Lavigne. Cave sums it up nicely in this sentence right here: "Bunny is almost positive that Avril Lavigne possesses the fucking Valhalla of all vaginas." So if you can’t find humor in a dirty, middle-aged man beating off to this ridiculous notion of Avril Lavigne as the end-all be all sex object, then this book might not be for you.

Don’t think this book is all grotesquery and gallows humor, because Cave is also melancholy and generous in his portrayal of Bunny Jr. When Cave writes about how Bunny Jr. loves his father for no reason greater than the fact that Bunny <i>is</i> his father, the prose makes you ache. If anything, Bunny Jr. is the collateral damage throughout this whole story. We watch as he tries to understand exactly who this man is that is supposed to be his father. The boy is smart—he spends his time cooped in the car reading through an encyclopedia—but is too young to realize that he is or find comfort in the fact. What Bunny Jr. wants is for his father to love him back and be proud of having him as his son. Unfortunately for Bunny Jr., his father is a cad.

A quick post script: For the five-star experience, get a copy of this book on audiobook. Nick Cave reads the novel himself, and there is nothing like hearing Cave’s exact and lyrical way of speaking, as he keeps the story moving at a rapt pace. Plus, the audiobook features an original score of music composed by Nick and Warren Ellis of the Bad Seeds (Nick Cave’s backing band). The score divides each chapter as well popping up every now and then at moments in the text where the music adds a surreal urgency to the events at hand. There’s also neat sound effects placed throughout the reading, so that when Bunny walks into a room with a flickering light there is also that all too distinct sound for us to hear right along with him. It all adds up to make a unique and unforgettable experience.

Also posted on GoodReads
Posted by Unknown at 8:11 PM