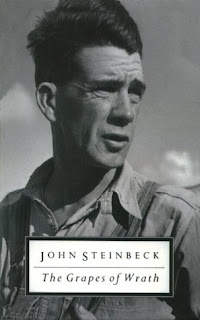 The Grapes of Wrath
Reviewed by: Stephanie
5 out of 5 stars

If you are an American you need to read The Grapes of Wrath.  It scares the poop out of me because, my fellow Americans, we are repeating history.  If live anywhere else read it as well as a guide for what not to do.


In the Grapes of Wrath Mr. Steinbeck tells the tale of the first great depression through the Joad family from Oklahoma, who has been displaced from their family farm through no fault of their own.  You see, there was a big bad drought which made farming impossible.  In those days the family farm fed the family and what they had left over they sold.  But when the drought hit the only thing that would grow was cotton, you can’t eat cotton, and that crop sucked the life right out of the soil so no other crop could grow in it for a very long time.

“These things were lost, and crops were reckoned in dollars, and land was valued by principal plus interest, and crops were bought and sold before they were planted. Then crop failure, drought, and flood were no longer little deaths within life, but simple losses of money. And all their love was thinned with money, and all their fierceness dribbled away in interest until they were no longer farmers at all, but little shopkeepers of crops, little manufacturers who must sell before they can make. Then those farmers who were not good shopkeepers lost their land to good shopkeepers. No matter how clever, how loving a man might be with earth and growing things, he could not survive if he were not also a good shopkeeper. And as time went on, the business men had the farms, and the farms grew larger, but there were fewer of them.”

Some guys with a lot of cash came along and bought up all the struggling family farms and leased the land back to the former family farmers and when they couldn’t produce, the new Owners kicked the families out of their homes.  Put them on the streets, children and elderly and all……..who cares, right?  Poor people are less than.

From California came hand bills, pamphlets promising jobs and urging the homeless to drag their whole lives via barely moving junk heaps to the golden state where grapes grew in bunches by the side of the road.  What choice did they have?  They drove across deserts and mountains, losing loved ones along the way, they answered those hand bills in droves.  What else could they do?

What happened when they got to California?  They didn’t get jobs, they got ridicule.  They were called Okies and shitheals and were looked down upon.  “How can they live like that?” The people with money would ask, as if being poor was a choice.  As if they were just lazy and all it would take to get out of poverty was to get a job……but there were no fucking jobs.  The owners sent out more handbills then they needed to.  Why? Because the more men begging for a job the less the owners would have to pay them.  Supply and demand.  The greedy sons a bitches wanted to pay as little as possible, and that is exactly what they did.  The Okies did not have a union of course.

"And the great owners, who must lose their land in an upheaval, the great owners with access to history, with eyes to read history and to know the great fact: when property accumulates in too few hands it is taken away. And that companion fact: when a majority of the people are hungry and cold they will take by force what they need. And the little screaming fact that sounds through all history: repression works only to strengthen and knit the repressed. The great owners ignored the three cries of history. The land fell into fewer hands, the number of the dispossessed increased, and every effort of the great owners was directed at repression. The money was spent for arms, for gas to protect the great holdings, and spies were sent to catch the murmuring of revolt so that it might be stamped out. The changing economy was ignored, plans for the change ignored; and only means to destroy revolt were considered, while the causes of revolt went on.”

Who are the “great owners” today?  The Walton family (of Walmart), six of them, have the same amount of money as the bottom 40% of Americans.  That is 124,720,000 people, people.  $93 billion…..BILLION and they want more, more money than could be spent in several lifetimes.  They don’t need it all, but the rest of America does.  Do you think the Walton’s might have an interest in keeping people poor?  Go check out who’s in that store at 3am.
Let’s also take a look at who is running against President Obama.  Mittens is so rich that he doesn’t even know what a doughnut is, and he’s fighting for the Waltons and all of the 1 %.  He’s so rich he thinks he is entitled to the office and “us people” do not need to see his tax returns……the nerve of us, move on.  We need to sit down, shut up, and stop asking questions because he, being a rich bastard, is an “owner” and we should know our place.   Not bloody likely.

And there’s the end.”