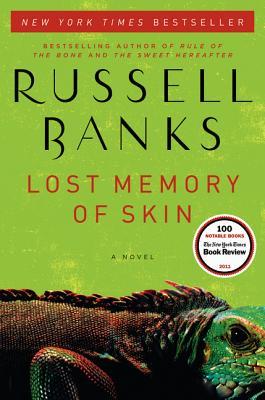 Russell Banks
Ecco Press
Reviewed by: Nancy
5 out of 5 stars

Suspended in a strangely modern-day version of limbo, the young man at the center of Russell Banks's uncompromising and morally complex new novel must create a life for himself in the wake of incarceration. Known in his new identity only as the Kid, and on probation after doing time for a liaison with an underage girl, he is shackled to a GPS monitoring device and forbidden to live within 2,500 feet of anywhere children might gather. With nowhere else to go, the Kid takes up residence under a south Florida causeway, in a makeshift encampment with other convicted sex offenders.

Barely beyond childhood himself, the Kid, despite his crime, is in many ways an innocent, trapped by impulses and foolish choices he himself struggles to comprehend. Enter the Professor, a man who has built his own life on secrets and lies. A university sociologist of enormous size and intellect, he finds in the Kid the perfect subject for his research on homelessness and recidivism among convicted sex offenders. The two men forge a tentative partnership, the Kid remaining wary of the Professor's motives even as he accepts the counsel and financial assistance of the older man.

When the camp beneath the causeway is raided by the police, and later, when a hurricane all but destroys the settlement, the Professor tries to help the Kid in practical matters while trying to teach his young charge new ways of looking at, and understanding, what he has done. But when the Professor's past resurfaces and threatens to destroy his carefully constructed world, the balance in the two men's relationship shifts.

Suddenly, the Kid must reconsider everything he has come to believe, and choose what course of action to take when faced with a new kind of moral decision.

Long one of our most acute and insightful novelists, Russell Banks often examines the indistinct boundaries between our intentions and actions. A mature and masterful work of contemporary fiction from one of our most accomplished storytellers, Lost Memory of Skin unfolds in language both powerful and beautifully lyrical, show-casing Banks at his most compelling, his reckless sense of humor and intense empathy at full bore.

The perfect convergence of writer and subject, Lost Memory of Skin probes the zeitgeist of a troubled society where zero tolerance has erased any hope of subtlety and compassion--a society where isolating the offender has perhaps created a new kind of victim.

Before reading this book, I never bothered looking at the National Sex Offender Registry. Maybe it’s because I don’t have children, or I don’t care to know that much about my neighbors, or I have my doubts that all the people listed are truly dangerous. Now that I’ve finished the book, I decided to go have a look. First, I found all 8 sex offenders in my area. After studying their faces closely, noting where they lived and how old they were, I looked at sexual offenders in other neighborhoods I’ve lived in and some from random locations. There were even a few women on the list. What in the world did these people actually do to get themselves in such a horrible predicament?

There are lots of very bad people out there who should be behind bars for a long time. But most criminals – murderers, drug dealers, wife-beaters, gangsters, arsonists, burglars – regardless of the crime, serve a portion of or their entire sentence and are then free to live their lives, trying to blend into society, often without their neighbors knowing a thing about their past. Sexual offenders, after serving their time, must continue to endure public humiliation, making it very difficult to find a decent job or a place to live. There are vicious sexual predators and psychopaths out there, and the need to protect a person’s privacy must be weighed against the need for public safety. But not all sexual offenders are a danger to society. The young man who sleeps with a precocious girl who lied about her age, the guy who leaves the pub and gets caught urinating in a public park, the guy who takes upskirt photos with his cell phone, the teenager who sleeps with a younger teen. The peeping tom. And let’s not forget those who were falsely accused. Some of these crimes are creepy, others are just the result of poor judgment. Should these minor offenders be treated the same way as violent criminals who are likely to commit crimes again? Therein lies my problem with the National Sex Offender Registry. The definition of sexual offender is way too broad and lots of innocent people are suffering unnecessarily because of dumb mistakes. While we are busy protecting our children from people who may not pose a danger to them at all, we are not knowledgeable of the possible danger from the neighbor who was arrested for dealing drugs or the alcoholic who habitually drives drunk.

Enter the Professor, a grossly overweight sociologist, and a man with his own secrets. He wants to interview the Kid for his research on homeless sex offenders. They form a tentative bond and gradually learn more about each other. The Kid remains reclusive, distrustful of others, with no plans for a future. The Professor shows him another way to live, while providing the basics he needs for his existence. He does, however, care very much for the animals he is now responsible for, an older dog and a parrot with damaged wings. For the first time in his life, the Kid begins to think better about himself and sees there are possibilities.

I’m in awe of Banks’ ability as a writer to make me feel for such undesirable characters, some who have no doubt committed horrible crimes, others just guilty of making bad choices. I spent some time studying sex offenders in my sociology and criminal justice classes and once the classes were over, the subject got forgotten. This book highlights a problem that should be addressed in a more humane way, without sacrificing public safety and at the same time allowing the offender to have an opportunity for rehabilitation and a chance to live a normal life. It is thought-provoking, no matter how you feel about the rights of sex offenders. For many reasons, this is a difficult subject to explore, and I felt Russell Banks pulled it off admirably. I look forward to reading more of his work.

Also posted at Goodreads
Posted by Nancy at 12:00 PM