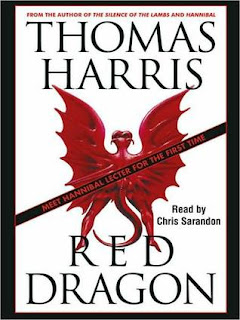 Now that I’ve just finished reading this book, I feel the need to scrub parts of my brain with steel wool for the purpose of removing certain scenes that Thomas Harris has so rudely embedded there.  Thanks a bunch Tom!

Will Graham has the rotten luck at being really good at his job.  He is a profiler for the FBI and while he was on the job catching Dr. Hannibal Lecter, Lecter caught him with a big sharp knife.   Will decides that was enough for him, so he makes the wise decision to retire.

But nooo!  Jack Crawford, Will’s former boss, shows up at his house asking for help on a new case of a new serial killer dubbed the Tooth Fairy, because the creep likes to bite his victims.

Here’s how the conversation goes between the two, broken down to its simplest form.

Jack:  Hey I need your help with a case because you’re the best at what you do.
Will: But I don’t want to on account I was nearly gutted last time I helped you.
Jack:  But you’re really good at your job.
Will: Okay…..since you put it that way, I’ll help.

Francis Dolarhyde, or the Tooth Fairy/the Dragon, had a pretty awful childhood (to put it mildly.) Born to a mother who rejects him because of a deformity, a hare lip, then raised by a sadistic grandmother  who adopts him for the sole purpose to get revenge on her daughter (not because she loves the boy).  As a result of growing devoid of all love, he turns out a little off.   Surprise!!

Where Dolarhyde has no empathy, Will has too much.  This is what makes him a good profiler; he is able to almost ‘become’ the person he is hunting, to understand them.

“Graham had a lot of trouble with taste. Often his thoughts were not tasty. There were no effective partitions in his mind. What he saw and learned touched everything else he knew. Some of the combinations were hard to live with. But he could not anticipate them, could not block and repress. His learned values of decency and propriety tagged along, shocked at his associations, appalled at his dreams; sorry that in the bone arena of his skull there were no forts for what he loved. His associations came at the speed of light. His value judgments were at the pace of a responsive reading. They could never keep up and direct his thinking. He viewed his own mentality as grotesque but useful, like a chair made of antlers. There was nothing he could do about it.”

That’s pretty dark stuff to deal with and still fight to maintain sanity.

When all was said and done I suppose I ‘enjoyed’ this book.  But yet I didn’t enjoy it at all.  It was very well done……it kept my attention throughout, but I don’t think this type of book is all that good for me.  While I love dark books, I seem to need them to be a bit fanciful…….not of the real world.  All the stuff that happens in the real world is depressing enough, bombings, school shootings, and kids shooting other kids to death, I feel the need to escape from that.

Books like this are just more of that.   Oddly enough though, I think the new TV show is fantastic.