A little something tasty to chew on 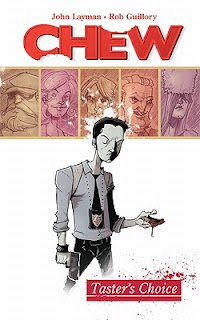 It's celebrate comics day here at Shelf Inflicted and the two Canadians have cherry picked two very different -- yet equally awesome -- graphic novel series to prove to you that the storytelling format is about a lot more than muscled men in tights and capes wielding superpowers. Brandon is singing the praises of Joe Hill's innovative and highly addictive Locke & Key series, and it's my job to turn you on to John Layman's Chew.

Oh yeah, baby! Should I have taken this much pleasure from a cannibalizing FDA special agent who gnaws on dead things to solve crimes? Probably not, but nothing can stem the tide of my glowing praise for such an original story concept delivered with this much dynamic flair, humorous overtones and an underbelly of noir nastiness. Can you spell epic win? The action is punctuated by ripping dialogue and graphic art that puts you into the scene, no muss no fuss.

No disrespect meant to all you vegetarians out there, but I love me some chicken, okay? I love it roasted, fried, cold in a salad or on a sandwich. I love it dark and white, leg and breast, bone in and boneless. Don't even get me started on chicken wings.

TAKE IT AWAY HOMER!


That's why just the idea of a future without poultry -- where it's been outlawed like booze during Prohibition -- sends me into a feathery panic. In Tony Chu's world, an avian flu has killed millions of people across the globe. In response to the pandemic, the processing, distribution, sale and consumption of chicken has been criminalized and a thriving black market of chicken bootleggers has risen up. This may sound stupid, but it's actually quite smart and nasty in all of its implications.

As you read on in the story you realize there is more than meets the eye. Was there ever really an avian flu pandemic? Is the government trying to cover up something much more sinister? Cibopath Tony Chu is on the case with his unique talent. Whatever he puts into his mouth gives him pictures, clues, a story, from the innocuous details of how an apple got from the tree to his hand, to the bloody details surrounding a victim's torture and mutilation.

It isn't something he can turn off, and his only reprieve are beets, the one food that Tony can eat without being bombarded by a wave of other sensory input. Go figure. Works for me. But if I had to give up chicken and eat beets all the day long? That isn't a life worth living my friend.

Tony has a MASSIVE GOON of a partner at the FDA named Savoy, who also shares Tony's cibopathic talents. Chu also meets food critic Amelia, who is able to harness her powers of food description to the point where she can make you taste anything, really taste it, just by describing it. Don't piss this gal off or she'll have you puking your guts out from the vilest tastes a human can think up. Does this turn Chu off? Hell no. He has the biggest crush ever and only wants to get closer to her.

I love that I have no idea where this story is heading next. But I am hooked and hungry for more, despite several gross out moments of Chu's gnawing on the dead (including a putrid, decayed dog) for information.

Pretty sure it's gonna be chicken for supper tonight.
Posted by Trudi at 8:37 PM