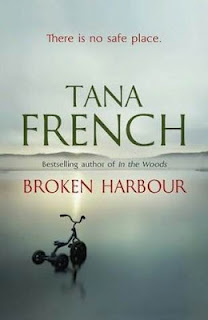 
This is another excellent psychological crime novel from Tana French. In this case the book features another member of the Dublin Murder Squad, Mick "Scorcher" Kennedy, who first appeared in a minor role in French's last book, Faithful Place.

Kennedy has the best solve rate on the squad. He's the star, and thus when a particularly brutal homicide occurs, Mick is assigned to the case. He's also teamed with a new young partner, Richie Curran, and, in addition to catching a killer, he's expected to show Richie the ropes and make a real detective out of him.

The case itself is a stomach-turner: a young family has been attacked; the father and two children are dead, and the mother is in intensive care, barely clinging to life. The scene is as desolate as can be imagined: a new seaside housing estate outside of Dublin named Brianstown that was only partially completed when the recession hit Ireland with full force and brought development to a screeching halt.

Mick and Richie arrive on the scene, out in the middle of nowhere, to find a scattered group of luxury houses, half of which sit unfinished and only a few of which are occupied. The victims, the Spain family, had been among the first to move in, enticed by the glossy brochures that promised a beautiful, luxurious lifestyle by the sea.

It didn't quite turn out that way, and the Spains are victims of the economic collapse twice over. They're trapped is this failing housing development and Pat Spain, the husband, father and sole breadwinner in the family, has lost his job in the downturn. Things have been very rough and getting worse for the Spains over the last several months, and the evidence initially suggests that Pat Spain may have gone over the edge, killed his children and attempted to murder his wife before taking his own life.

But it soon becomes apparent that there's a lot more going on here than may have initially appeared, and some very strange, seemingly inexplicable things have been going on recently in the life of this family. It's a very unsettling case, especially for Mick Kennedy, who has his own memories of this setting by the sea.

Back before the developers bought the property and renamed it Brianstown, the place was known as Broken Harbor, and Mick's family spent a couple of weeks there every summer until a tragedy struck the family. The repercussions of that event are still reverberating through Kennedy's life as he tackles this current tragic case, and the combination of the two incidents may be enough to overwhelm even the superstar of the Dublin Murder Squad.

French has created here another cast of unforgettable characters, both among the family members who are the victims of the crime and the detectives who must attempt to solve it. For all his confidence, Mick Kennedy is a deeply troubled man and French will push him to the very limit. Beyond the case itself, this book also vividly conveys the havoc unleashed by the economic collapse and the consequences it produced for so many innocent victims.