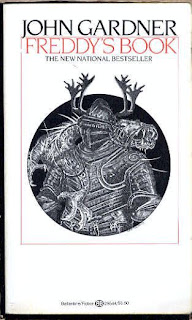 So declares Prof. Sven Agaard, an old-school historian of former glory, now an outcast at his own university. His audience is Prof. Jack Winesap, the academic star of the moment and expert in the somewhat rarefied (and questionable?) area of “psycho-history” (no, not Asimov’s). He is Agaard’s polar opposite, sitting happily on the other end of the academic spectrum in terms of both popularity and academic rigour. Despite the animosity that Agaard displays towards Winesap and his field he ends up inviting him to his home. For his part Winesap is intrigued, who or what can this monster be? Why is this obviously antagonistic man even speaking to him? Of course he accepts. Thus Gardner sets up the mystery that will lead us into the first part of the novel which plays out this uncomfortable, though enlightening, scenario.

In the course of an evening where Winesap is snowed in and forced to partake of Agaard’s ‘hospitality’ he comes to learn the answers to some of his questions. Freddy, Agaard's son, turns out to be an outcast himself. A giant of a boy, he not only has a physical appearance that sets him apart, but is apparently subject to rages that make his cohabitation with others somewhat dangerous. At the boy’s own instigation locks and bars are kept on all of the doors and windows of Agaard’s drafty old house, meant not to keep Freddy in, but to keep others out. What at first seems like a horrific confinement comes to take on a different colour as we learn more about this small family and come to see that Agaard is not just a crusty old man hiding an unwanted child from the world, he is a father sick at heart over the pain he has seen Freddy suffer whenever he has been exposed to the world at large. Freddy has thus learned to be an introvert with an intellectual bent. His entire experience of the world has come from books and his room is cluttered with them, along with the various drawings and dioramas he has made based on their contents.

It also appears, much to Agaard’s chagrin, that Freddy is something of a fan of Winesap’s and so he has called in this man, whom he views with nothing but disdain and contempt, in the hopes that he can reach out to his son who otherwise remains locked in an ivory tower of his own making. Their initial meeting does not seem to go well. Winesap is nonplussed while Freddy is virtually silent, doing his best to hide his enormous bulk from view. Ready to set the matter at a dead loss as he readies himself for bed, Winesap is surprised when Freddy creeps up to his room in the dead of night and leaves behind a present for him. It is the eponymous book of the title, and is also, perhaps, the only method Freddy has learned of communicating freely with another person.

What follows, and which contains the bulk of the novel’s content, is the text of Freddy’s manuscript that is half fable and half history, detailing the adventures of a 16th century Swedish Knight and his conflict with the devil. I’m a little uncertain of how to proceed with this review. Gardner packs so much into this relatively slim volume that to cover all of the ideas he explores would be counter-productive. Suffice it to say that this is an existential novel and as we follow the main character Lars-Goren in his travails we touch on a host of philosophical and political issues that run the gamut of human experience. Lars-Goren and his cousin Gustav Vasa begin the story watching as their kinsman Sten Sture and his fellow revolutionaries are slaughtered for their revolt against the Danes that currently rule Sweden. Lars and Gustav barely escaped this fate and long to avenge the deaths of their family and friends. At this point the devil appears and, taking Gustav under his wing, the road starts to be paved for the rise of King Gustav and the expulsion of the Danes from Sweden. Lars-Goren, a man who has known no fear in his life, suddenly becomes gripped by this unknown sensation. Of what is he afraid? Upon examination he realizes it is neither his death, nor eternal damnation that worries the knight. Just what it is proves to elude him and his search for an answer takes up the rest of the story.

Into the tale of Gustav’s rise comes another major figure: Bishop Hans Brask, an old confrère of the devil’s and a man able to easily weather the numerous instances of political turmoil his nation has undergone with equanimity and safety. He is a man ahead of his times, an ironic and disillusioned cynic in the dying days of the age of faith. The idealism of his learned youth has given way to realpolitik on a political scale and nihilism on the metaphysical.  Brask first uses Gustav for his own ends, lending his support to his rise when it suits his purposes, but willing to let him hang when he is no longer of use. Much to the chagrin of both Brask and the devil Gustav turns out to be a much wilier fox than they had anticipated. Lars-Goren can do little more than watch in dismay as his cousin moves from idealist to tyrant. He wishes for no further part in things, especially as they concern the devil, and wants only to return to his own family and demesne.

Gustav is convinced that it is only the prince of darkness that stands in the way of his true success as king, for it seems that everything he touches goes astray and every plan he makes goes awry…whose fault could it be other than the devil himself? As a result Brask and Lars-Goren get thrown together by Gustav and tasked with the impossible commission of killing the devil. Thus we have the seemingly simple, though deep thinker Lars-Goren, who still wants to believe in the good of the world with Brask, the man who has seen it all and is certain that the world ultimately holds no meaning. What will they learn from each other, and how in the world will they kill the devil?

Gardner (or, if you wish, Freddy) uses each of his characters to evaluate the different ways of looking at the world and struggling with its eternal questions. One can see in this novel a real cry of pain from the post-modern man who has at once both embraced the view that all of the old meanings no longer hold sway and that new methods are leaving even the concept of ‘meaning’ as a questionable one at best, with the nostalgic looking-back to these beliefs with a yearning that is nearly all-consuming. I’m not really quite sure what answer, if any, Gardner comes up with. I will have to think about this book a lot more before I even pretend to have an opinion on that, but there is ample food for thought here. My biggest complaint would probably be that we never return again to “our” world and see Freddy, Winesap and Agaard again. I’m fairly certain that Gardner felt that any answers we wanted about Freddy’s life, and any meaning he derived from it, were contained in the text of his tale of knights, kings and devils, but I would have liked to visit him again for some kind of closure to his own tale.

Also posted at Goodreads
Posted by Terry at 11:57 AM