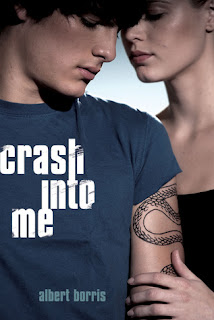 Crash Into Me
by Albert Borris

Review by Sesana
Three out of five stars

Owen, Frank, Audrey, and Jin-Ae have one thing in common: they all want to die. When they meet online after each attempts suicide and fails, the four teens make a deadly pact: they will escape together on a summer road trip to visit the sites of celebrity suicides...and at their final destination, they will all end their lives. As they drive cross-country, bonding over their dark impulses, sharing their deepest secrets and desires, living it up, hooking up, and becoming true friends, each must decide whether life is worth living--or if there's no turning back. "Crash Into Me puts readers in the driver's seat with four teens teetering on the edge of suicide. But will their cross country odyssey push them all the way over? Only the final page turn will tell, in Albert Borris's finely-crafted tale of friendship forged from a desperate need of connection.

Four suicidal teens decide to go on a road trip. They'll tour the graves of famous people who killed themselves, then commit suicide as a group in Death Valley. Sound tense? It certainly can be.

But the pacing is so very slow. Considering how important the suicide grave tour seems to be in the blurb, and at the beginning of the story, most of the book takes place in between. This is not necessarily bad, because some of the best moments in the book happen in those in between places. But it does mean that the hook gets lost, and that's a shame.

This is one book where I do wish that the author had gone with multiple POVs. I would have loved to have seen into the heads of the other characters, and I think it would have kept the story from dragging. Because for me, I think the POV character, Owen, was one of the less interesting ones in the book. I especially would have loved to have seen what exactly was going on in Audrey's head, since she baffled me as a character throughout. I'm left, at the end of the book, wondering what exactly she wanted and expected to happen going into this. But that's just one of the many open questions left at the end of the book.

It certainly isn't a bad book, though. I think a lot of the conversations and reactions the characters had were genuine, even if the situation as a whole isn't exactly the most believable. The ending probably won't surprise anyone, at least not once they get there, and there are plenty of loose ends for these characters. Satisfying enough of an ending, though.

Also reviewed on Goodreads.
Posted by Sesana at 2:07 AM