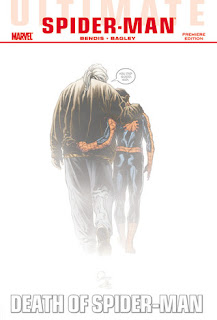 
This doesn't really need a plot summary. It's all right there in the title. Peter Parker will die. And because this is in the Ultimate universe, his death will be real and permanent. That's the plan, at least, and Marvel hasn't changed their minds yet.

I've read this book twice now. The first time around, it was first time I'd read Ultimate Spider-Man in years. I'd stopped somewhere around the fifth or sixth trade, and forgotten virtually everything that I'd read. Even without the background of 150+ issues, I was still absorbed by the story. Enough so that I went back and read those 150+ issues, and then this again. And let me tell you, it makes a huge difference.

It's not that you can't read and enjoy this trade alone, without any context but what most people have gotten through cultural osmosis. If you can vaguely identify who Peter Parker, Aunt May, Uncle Ben, Mary Jane Watson, Green Goblin, and Doctor Octopus are, you're good. Those little scraps of information are all you really need to know. And yet, I still heartily recommend reading more Ultimate Spider-Man first. Because context will help, greatly, and also because Ultimate Spider-Man, to this point, is almost uniformly good to excellent.

I'm glad that I came back and read, with context. I understand what Gwen and Johnny Storm and Bobby Drake are doing around here. I know where Peter is in his life, and what he had to do to get there. So I know exactly what he is sacrificing to protect his family. And I know this kid, in a way that I didn't on the first read. I thought this book was wrenching the first time I read it, but that was nothing compared to reading it after getting to know Peter so well, and loving him so much for being the flawed and inherently decent person that he is. And it also makes me sad to know that I'll probably be saying goodbye to the rest of his supporting cast, the family he built over 150+ issues. I'll miss them, too.

As far as "event" comics go, this is one of the better ones, possibly the best. Because Bendis put in the hard work of making me care for the characters, to get invested in them and their lives, to want so badly for them to be happy. And then he goes and punches me in the heart, curse him. Will people one day look back on this story as a classic, one of the shining moments of the early twenty-first century? I don't know if I'd go that far. But it absolutely does rise above the gimmick story and cash grab that I was afraid this would be before my first read. This is more than just an "event".