Happy Thanksgiving Have Some Time Travel with a Twist! 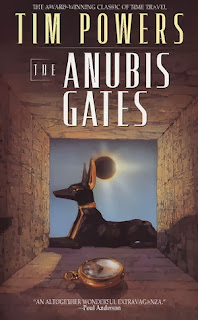 Brendan Doyle, a specialist in the work of the early-nineteenth century poet William Ashbless, reluctantly accepts an invitation from a millionaire to act as a guide to time-travelling tourists. But while attending a lecture given by Samuel Taylor Coleridge in 1810, he becomes marooned in Regency London, where dark and dangerous forces know about the gates in time. Caught up in the intrigue between rival bands of beggars, pursued by Egyptian sorcerers, befriended by Coleridge, Doyle somehow survives. And learns more about the mysterious Ashbless than he could ever have imagined possible.


Cross Charles Dickens with H.G. Wells add some Clive Barker and throw in Neil Gaiman's absurd nature and I think you'll have the basis for this book. Don't forget a little Egyptian mythology and a Punch and Judy show! Not only did the author manage to make that all work he also threw some poetry and the original poets at you. One of the few times that poetry truly enhanced the tale rather than seeming like an awkward add on .

I was pretty much swept up from the start and that's a good thing because this ride makes no stops. The action barely gives you time to catch your breath. The story is gripping and at times horrifying. It also had humorous and even gentle moments.

The implementation of the time travel alone was enough to make me sit up and take notice. No gadgets required! Powers obviously spent some time doing research on his historical periods. Each is woven into the tale flawlessly. At times I felt I was reading a Penny Dreadful albeit a really good one.

I don't think I've truly enjoyed something this novel in a long time. More please Mr. Powers!
Posted by Zorena Deckard at 10:00 AM