Ain't That a Witch 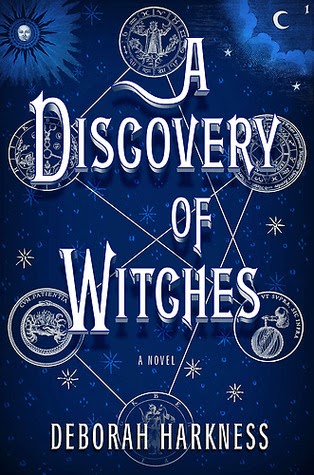 A Discovery of Witches
by Deborah Harkness
Published by Viking Penguin

In A Discovery of Witches, we clueless humans have no idea that we share our world with witches, vampires and daemons (creatures whose manic bursts of creativity result in some of the world's greatest artistic works). Isn't that exciting? One would certainly think so. So, what kind of shenanigans does this preternatural lot get up to while we live our ordinary lives?

Behold the books that shall be read! Thrill to the revelation that trips to the library will be made time and time again! Gasp as cups of warm tea are made and consumed! Swoon as vampires are repeatedly described as smelling of baked goods! And grip the edge of your seat for the most bizarre yoga-scene in the history of the written word!

That's right, folks. Vampires, witches, and daemons aren't like you and me--in fact, our lives are infinitely more interesting than theirs.

Seriously, what the hell is this? The best I can tell is that it's Twilight for grown-ups. And I can't believe I'm going to say this, but here it goes: Twilight is better. Suddenly vampires playing baseball during thunderstorms seems down right genius compared to vampires attending a supernatural yoga class. You want to drain all the sex appeal right out of your vampiric leading man? Just mention him doing some peculiar yoga move where he seems to be holding himself up vertically from the floor by nothing but his ear.

And then prattle on about how he's cold. And always has his hands stuffed in his charcoal trousers. And gets ridiculously enraged every time someone mentions blood because . . . he . . . might . . . not . . . be . . . able . . . to . . . control . . . himself (despite living a relatively normal life around humans for 1,500 years and seeming to need little in the way of sanguine sustenance). And how he maintains control of himself by always grasping the talisman he wears beneath his some-shade-of-grey sweater. And then have him ply the witch he is inexplicably drawn to with hundreds of bottles of wine and query her as to what every single one tastes like.

Oh, ho! And the witch! Now there's a live wire! Diana Bishop spends her days running, rowing, yoga-ing (?), and reading. Oh, and never using her magic because she wants to be just like us. Well, actually, she does use her magic every now and then, but only when it's really important. Like fixing her washing machine or getting a book off of a really high shelf. But other than that, it's all ixnay on the magic-ay.

At 200 pages in, I decided I couldn't stomach it any more. After all, up to that point, I had already been treated to a baker's dozen of the same basic scene:

--Diana goes to the library

--creatures are there; they pretend to read so they can watch her read all day, but they do so in a really creeptastic and menacing way, man

--Matthew, the vampire, goes to the library and pretends to read so he can watch them watching her watch a book and protect her in case one decides to, oh, I don't know, nick her with a really nasty papercut or something

--Matthew will get angry with Diana, she'll apologize, and he'll settle his ass down

When I decided I had a life to live, Matthew was fervently explaining how daemons, witches, and vampires might be going extinct!

To which I can only ask, so what's the problem?
Posted by Amanda at 1:58 PM