A Drink Before the War 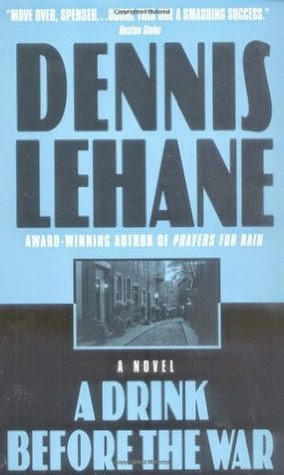 Patrick Kenzie and Angela Gennaro are tough private investigators who know the blue-collar neighborhoods and ghettos of Boston's Dorchester section as only natives can. Working out of an old church belfry, Kenzie and Gennaro take on a seemingly simple assignment for a prominent politician: uncover the whereabouts of Jenna Angeline, a black cleaning woman who has allegedly stolen confidential Statehouse documents. But finding Jenna proves easy compared to staying alive once they have. The investigation escalates, implicating members of Jenna's family and rival gang leaders, while uncovering extortion, assassination, and child prostitution extending from bombed-out ghetto streets to the highest levels of state government.

Patrick Kenzie and Angela Gennaro are offered big bucks to find a cleaning woman who made off with some confidential documents. It sounds like a simple case, but there’s a lot more to those documents than just state secrets.

Kenzie and Gennaro both grew up in blue-collar Dorchester and even though they’re tough, dealing with sleazy politicians and dangerous gangs takes all their energy, resolve and determination.

The detectives have their own issues to deal with too. Angie is married to an abusive husband, yet harbors some feelings for Patrick, who is her childhood friend. Patrick can relate, having suffered abuse at the hands of his own father.

I loved this dark, gritty, and violent story that explores racial and class conflicts, politics, and the evil that lurks in people’s hearts. I love the witty banter between the detectives and their growing relationship. A believable and realistic urban setting, gun battles, car chases, and a rich cast of secondary characters help make this a very fun and worthwhile start to a series.

Also posted at Goodreads
Posted by Nancy at 10:32 AM