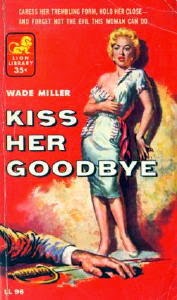 
First published in 1956, and written by Wade Miller, the pseudonym of the writing team of Bob Wade and Bill Miller, this is a noir story of a man trapped by circumstances beyond his control, but with a twist.

As the book opens we meet a twenty-eight year-old Ed Darnell who's on the road with a very sexy eighteen-year-old girl named Emily. Clearly, they're on the run from something, but we don't know what. At a stop at a gas station, Ed's temper flares when the pump jockey pays what Ed deems to be too much attention to Emily. He's mad both at the attendant for leering and at Emily for posing in what Ed deems to be a seductive fashion.

Shortly thereafter, Ed and Emily check into a ratty motel in a small town named Jimmock, not far from Bakersfield, California, and when the fat slob of a motel owner gives Ed a knowing glance, Ed insists that he and Emily are brother and sister. The motel guy says it's no skin off his nose and so Ed pulls out the birth certificates to prove it. Once in the room, he sets up the wooden screen that he always carries with them to divide his twin bed from Emily's.

It turns out that they really are brother and sister and that their parents are both dead. Emily, sadly, is mentally challenged--an eighteen-year-old woman with the body of a sex kitten and the mind of an unsophisticated twelve-year-old. Emily is innocent and out-going and the boys are naturally crazy about her. But then whenever one of them makes a move on her, Emily acts out in a way that puts her and her brother on the run again.

It seems like a never-ending cycle. Ed loves his sister but has no idea how to handle these situations, except to hit the road. Now, in Jimmock, he senses a chance for them to put down roots, but can this really be possible?

This is not a crime novel in any traditional sense, but it is an interesting story and one really feels for the dilemma in which Ed finds himself. He has essentially sacrificed his own life so that he can care for his sister, but the obstacles in his path seem overwhelming. The book has been reprinted by Stark House press in a volume along with another Miller book, Kitten With A Whip, and fans of this genre might want to seek out this edition.