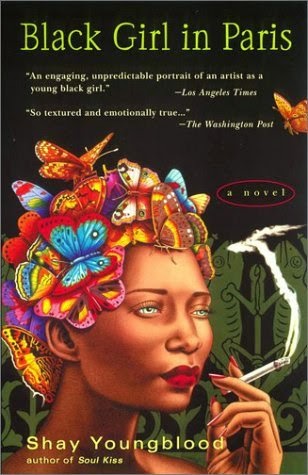 Black Girl in Paris wends its way around the mythology of Paris as a city that has called out to African-American artists. Like James Baldwin, Langston Hughes, and Josephine Baker before her, Youngblood's heroine leaves her home, in the American South, nurturing a dream of finding artistic emancipation in the City of Light. She experiments freely, inhabiting different incarnations--artist's model, poet's helper, au pair, teacher, thief, and lover--to keep body and soul together, to stay afloat, heal the wounds of her broken heart, discover her sexual self, and, finally, to wrestle her dreams of becoming a writer into reality.

Youngblood's lyricism, as effortless as an inspired improvisation, and her respect for the tradition she depicts create a natural tension between old and new, reverence and innovation, and tell a story at once timeless and immediate.


I love Paris, its grandeur, its palaces, museums, monuments, breathtaking views, restaurants, cafes, its rich culture and history. It is a dynamic, international and happening place.

It’s been about 5 years since I’ve been there last, so I was really looking forward to taking a literary trip to Paris.

Eden, a 26-year-old Black woman from Alabama and an aspiring writer, journeys to Paris with just $200 in her pocket to follow in the footsteps of her literary heroes – James Baldwin, Richard Wright and Langston Hughes.

This could have been a fascinating story, but I found the descriptions of Paris vague, the main character too naïve for her age, and far too much of the story focused on her menial jobs. I wanted a little glimpse of the past, some insight into her heroes who were just names dropped on the pages. I also wanted to know more about France’s troubles – the racism, the struggles of the poor and working class, the problems of immigrants.

I wanted a more serious story and less whimsy. I could have done without the recipes and the silly musings about art and love. There were interesting secondary characters I would have liked to know more about – Eden’s androgynous boyfriend, Ving, and his friend Olu-Christophe, a Haitian living in Paris without papers, and Luce, Eden’s friend/lover who taught her how to take what she needed in order to survive.

The story was pleasant enough reading, but lacked passion and spirit, making my literary trip to Paris rather disappointing.
Posted by Nancy at 6:00 AM