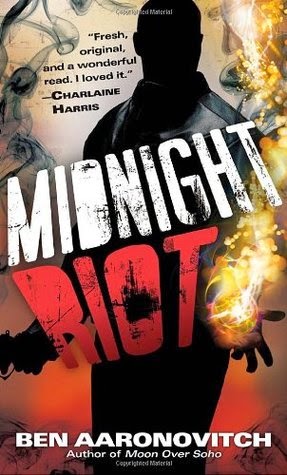 Probationary Constable Peter Grant dreams of being a detective in London's Metropolitan Police. Too bad his superior plans to assign him to the Case Progression Unit, where the biggest threat he'll face is a paper cut. But Peter's prospects change in the aftermath of a puzzling murder, when he gains exclusive information from an eyewitness who happens to be a ghost. Peter's ability to speak with the lingering dead brings him to the attention of Detective Chief Inspector Thomas Nightingale, who investigates crimes involving magic and other manifestations of the uncanny. Now, as a wave of brutal and bizarre murders engulfs the city, Peter is plunged into a world where gods and goddesses mingle with mortals and long-dead evil is making a comeback on a rising tide of magic.

I’m a fan of Jim Butcher’s Dresden Files series, even though I got tired and stopped reading after #9. After a while the stories became too repetitive and I didn’t see any significant growth in Harry’s character. His smart-ass comments that were amusing in the earlier books started getting annoying towards the end.

In the hopes I would find a fun read similar to the Dresden books, I picked up Midnight Riot. It wasn’t a bad book, but it wasn’t a great one either. Peter Grant was an interesting character. He is a constable in London’s Metropolitan Police who wants to be a detective, but his superior thinks he is better suited for pushing paper. Finding a headless corpse in The Actors’ Church in Covent Garden and talking with a ghost who witnessed the crime draws him to Thomas Nightingale, the force’s investigator of supernatural crimes. Under Nightingale’s patient tutelage, Peter learns how magic works and how to hone his investigative skills. He is kept very busy as the body count increases and his negotiation skills are called upon to help resolve the differences between the magical rulers of the Thames River. This is when the story seemed to lose focus for me. There were two stories in one, and neither was compelling enough to keep my interest. I found my attention wandering numerous times and took breaks to read other stories.

I loved that Peter is mixed race, his father a failed jazz musician and his mother a cleaning woman from Sierra Leone. While I enjoyed how the ethnic and racial diversity of London was portrayed, I couldn’t really get a feel for the city. I need more than street names, mention of famous landmarks, and references to TV shows or movies I haven’t seen or heard of. Too many acronyms became confusing and I found myself going back in the story to find out what they stand for.

Overall, the story was fast-paced, but not especially gripping. I liked Peter’s voice, his witty sense of humor and his scientific approach to magic. But like Harry Dresden, his sexual maturity never exceeds the level of a teenage boy, even though he is attracted to his colleague, Leslie, and Beverly Brook, daughter of Mother Thames. I’m not sure if I’ll continue with the series.
Posted by Nancy at 6:42 AM