Kent Starling Gets a Last Dance in Phoenix 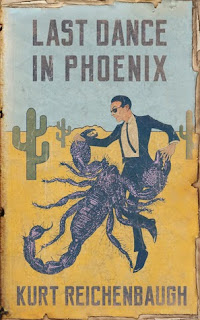 In 2013, Kurt Reichenbaugh gave us Sirens, a hugely entertaining mash-up of several genres set on the Florida Gulf Coast in the late 1970s. He now returns with Last Dance in Phoenix, a taut, gritty novel in the hard-boiled tradition set in the present day.

At the center of the book is an accountant, Kent Starling, who labors day by day in his cubicle, moving numbers around from one column to another in a constant effort to arrange them in ways that will please his bosses, whom Starling believes are all basically clueless idiots. His fellow employees don’t rank much higher in his estimation and so, perhaps needless to say, the job is something less than challenging or inspiring.

Things aren’t all that much better on the home front. Kent’s marriage to his wife, Denise, lost its spark some time ago and has settled into the proverbial rut; he can barely even remember the last time they had either sex or a meaningful conversation. Thus disappointed with virtually every aspect of his life, Starling makes the classic noir mistake and gets involved with The Wrong Woman, and from that point on his life begins to spiral steadily downward into a gigantic disastrous mess.

Shortly after beginning this affair, Starling receives a social media friend request from Roy Biddles, who was perhaps his closest childhood friend back when Kent was growing up in Florida. Roy was something of a loser and never much of a real friend and so when Kent joined the Air Force and left Florida, he lost track of Roy. Suddenly, though, Roy is back, demanding to be a part of Kent’s life again. He seems to somehow know a great deal about Kent’s life in Phoenix, including the fact that he’s having an affair, and he’s making only thinly veiled sinister threats about what might happen should Kent choose to ignore him.

Obviously, this cannot end well. Before long, someone will be dead and Kent Starling will have made enough stupid mistakes to be the prime suspect. Things will continue to go from bad to worse and before long, it’s apparent that not only is Starling’s freedom on the line but perhaps his life as well.

Starling confesses at one point that he doesn’t read crime fiction and that he doesn’t watch cop shows on television. Had he done so, he might have known enough not to keep making one stupid blunder after another, thus getting himself deeper and deeper into trouble.

Fortunately for the reader, though, Kurt Reichenbauch obviously has read a lot of crime fiction and knows this genre very well. The result is a fast-paced and gripping tale that will engage and entertain even those readers who are well-versed in the field—a very good read.
Posted by James L. Thane at 10:32 AM