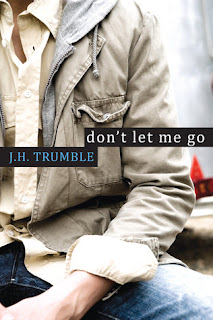 J.H. Trumble
Kensington Publishing
Reviewed by Nancy
5 out of 5 stars

Some people spend their whole lives looking for the right partner. Nate Schaper found his in high school. In the eight months since their cautious flirting became a real, honest, tell-the-parents relationship, Nate and Adam have been inseparable. Even when local kids take their homophobia to brutal levels, Nate is undaunted. He and Adam are rock solid. Two parts of a whole. Yin and yang.

But when Adam graduates and takes an Off-Broadway job in New York—at Nate’s insistence—that certainty begins to flicker. Nate starts a blog to vent his frustrations and becomes the center of a school controversy, drawing ire and support in equal amounts. But it is the attention of a new boy who is looking for more than guidance that forces him to confront who and what he really wants.

J.H. Trumble’s debut, DON’T LET ME GO, is a witty, beautifully written novel that is both a sweet story of love and long-distance relationships, and a timely discourse about bullying, bigotry, and hate in high schools.

If you decide to read this book, there are two things you need to overlook.

- The frequent time jumps throughout the story can be disorienting. Considering that very bad things happen to the main characters, I appreciate the author’s use of this technique that in some ways helps to lessen the intensity of the events and in other ways makes them even more horrifying. Just pay attention and you will find the story flows nicely and comes together in the end.

- The end! The craptacular ending that takes place 10 years after the story’s events. Though it was nice to see most of the story’s main conflicts resolved, I wanted more evidence of the characters’ work to get to that point. I also felt that certain significant issues were not addressed, which left me feeling vaguely unsatisfied.

Nate and Adam meet in high school and are joined at the hip. Their love is true, but Adam heads off to New York to take an acting job after graduation, putting great strain on their relationship. Nate and Adam’s relationship has all the passion and intensity of young people in love and was portrayed so effectively and authentically, that I found myself remembering my own difficult teenage years. It was easy to empathize with Nate and Adam, even if they lacked communication skills that would have prevented many of their problems. This is not just a love story, though. There is pain, heartbreak, and betrayal in spades. And there is the brutal sexual assault that left Nate emotionally wounded long after his injuries healed. Sensitive readers need not worry. Trumble skillfully interweaves details of the attack and its aftermath delicately through flashbacks.

I loved this book and gobbled it up in two days, discreetly swiping my tears while I was riding the bus to work. Nate and Adam were so real that I wanted to reach through the pages and hug them. Though Nate’s neediness and insecurity irritated me at times, I had to keep reminding myself that he is a teenager who suffered a traumatic experience. I’m glad Nate and Adam had the support of their friends – Danial, a straight ally of Pakistani descent; Juliet, Adam’s best friend who has a crush on Nate; and Luke, a sensitive, closeted boy who is drawn to Nate and is equally as needy. While I liked the supporting cast, I couldn’t help being slightly annoyed by Juliet. One of these days I would like to read about a strong female character who can have a close gay male friend while still having a fulfilling life of her own. I realize this is a book for young adults, but I was slightly bothered that the sexual intimacy between Nate and Adam was perfunctorily handled and lacking in sensuality. It would have been nice to have a tender love scene contrast with all the homophobia and brutality.

Minor complaints aside, this was an amazing book. Very highly recommended!