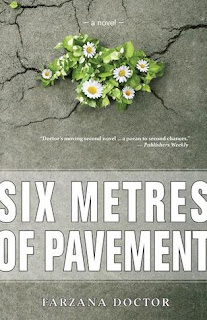 
Ismail Boxwala made the worst mistake of his life one summer morning twenty years ago: he forgot his baby daughter in the back seat of his car. After his daughter's tragic death, he struggles to continue living. A divorce, years of heavy drinking, and sex with strangers only leave him more alone and isolated.

But Ismail's story begins to change after he reluctantly befriends two women: Fatima, a young queer activist kicked out of her parents' home; and Celia, his grieving Portuguese-Canadian neighbour who lives just six metres away. A slow-simmering romance develops between Ismail and Celia. Meanwhile, dangers lead Fatima to his doorstep. Each makes complicated demands of him, ones he is uncertain he can meet.

I started reading this book on the eve of my 20th wedding anniversary. It was fun getting immersed in other people’s lives and problems rather than spending time pondering whether human beings are meant to spend more than 20 years together.

Ismail Boxwala is devastated by the accidental death of his baby daughter, burying his sorrow in alcohol and casual sexual encounters. His growing friendship with a grieving Portuguese widow and a homeless queer girl shifts his focus away from himself and onto helping others through their difficulties. Ismail gradually learns to process his grief and find some inner peace. This story takes place in Toronto and features a cast of unique, engaging and diverse characters going through significant changes in their lives. The pace is gentle, and while there is some drama, it shies away from intensely emotional interactions and upsetting situations. Instead, it shows how unlikely people can intersect and through friendship and understanding they can find themselves and discover meaning in their lives.

Ismail, Celia and Fatima are such well-drawn characters that they can be your friends, neighbors, or relatives. Their struggles and joys feel authentic. It was hard for me to leave them when the book ended.

This is a big-hearted, comforting and hopeful story that explores grief, aging, loneliness, rejection, identity, culture and traditions, as well as the diversity and fluidity of modern families.

Highly recommended.
Posted by Nancy at 9:17 AM