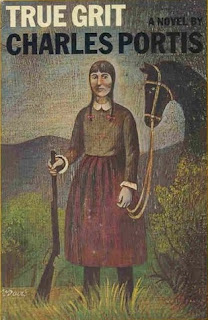 Wow, what a great story! Mattie Ross is just 14 years old when she hooks up with Rooster Cogburn, the “meanest” U.S. Marshal, to avenge her father, killed by an outlaw who took advantage of his good nature.

Mattie endures bad weather, illness, grueling hours on horseback, runs into outlaws, and fights off rattlesnakes. She’s tough-talking, honest, loyal, fearless, and I enjoyed every moment with her. I also loved the realistic historical details and well-drawn secondary characters. The gruff and unkempt Rooster Cogburn was a perfect match for the stubborn and willful teenager.

Mattie’s thoughts and exchanges with Rooster were hilarious.


“Nature tells us to rest after meals and people who are too busy to heed that inner voice are often dead at the age of fifty years."


“I had hated these ponies for the part they played in my father’s death but now I realized the notion was fanciful, that it was wrong to charge blame to these pretty beasts who knew neither good nor evil but only innocence. I say that of these ponies. I have known some horses and a good many more pigs who I believe harbored evil intent in their hearts. I will go further and say all cats are wicked, though often useful. Who has not seen Satan in their sly faces?”


The story is told by Mattie 50 years later. She is wealthy, unmarried, churchgoing, and as spirited as she was when she was a teen.

Though I’ve never been a fan of John Wayne films, I really enjoyed this classic. The remake, directed by the Coen brothers and starring Jeff Bridges as Rooster Cogburn, is also well worth watching.

See all my reviews
Posted by Nancy at 9:00 AM