The Autobiography of a Seaman by Thomas Cochrane
Reviewed by Jason Koivu
My rating: 4 of 5 stars

One of my favorite '90s bands, The Jon Spencer Blues Explosion spat lyrics that often included their band name or shrilled, "You gonna know my name!", as if they were doing their own advertising right there and then, in song, because if you don't blow your own horn...fuck, no one else will.

That's how it was back in the old days. You had to toot your own flute to get ahead, and sometimes just to get your own, your just desserts. Military leaders of the past especially had to head up their own public relations. Some had rich and influential friends and relations who might round out the PR team, but mostly it was DIY.

Such were the times for Admiral Lord Cochrane, one of the courageous and daring British naval captains during the Napoleonic Wars. Forester's Hornblower series and Patrick O'Brian's long-running Master and Commander series both modeled their heros after Cochrane. So exciting was his career, little in the way of fiction needed to be invented by either writer. And so effective was Cochrane against the enemy, that the French named him "The Sea Wolf" and that notorious megalomaniac Napoleon would write about him in his post-war diaries.

Never heard of Cochrane? Well there are reasons for that...

Having served aboard numerous ships, Lord Cochrane gained insight into the workings of the navy and had ideas to improve matters. To do so, one needed to change laws, so he took up politics, joining the House of Lords. However, Cochrane's ideas for change pigeon-holed him as a naval reformer. It was a bad name as far as his bosses at the Admiralty were concerned. A reformer was a "radical" and those were considered as dangerous as liberals to conservatives.

But all Cochrane wanted was to do away with naval excess and costly dockyard practices, namely the thievery and bribery undermining the service. All the same, this made him an enemy of the establishment, who saw nothing wrong with the way things worked.

Cochrane, having some of his father's inventiveness in him, was also known as an innovator. Along with "radical", "innovator" was another scarlet letter stamp. Again, this sounds like it should be a good thing. However, the British Navy was fond of tradition and not fond of anything that might disturb the old ways. They'd been successful up to that point and "you don't fix what ain't broke!" huff-huff, grunt and grumble...

The situation is almost too absurd. Here was this brilliant young naval officer evading ships of the line, harrying the enemies coast and halting its trade, disrupting the progress of enemy troops, taking ships six times the size of his own in tonnage, crew and armament, and yet his achievements were constantly overlooked, his commendations for junior officers ignored. In essence, he was doing all and more that the British Navy asked of their captains and they just wanted him to go away. Very shabby treatment indeed. Ah, if only his politics aligned with the crusty old gents lining their pockets with the King's gold, a good deal of which belonged in the pockets of the officers and sailors for doing all the dirty work as was the "custom of the service," which might be conveniently overlooked now and then or out-and-out ignored if a technicality could be grasped upon. There's hypocrite defined for you.

One of the most egregious cases of discrimination against Cochrane came when he once came up with a smart way in which to keep ships afloat longer, which was summarily shot down regardless of its merits. When the same idea was later presented by an unrelated 3rd party, the money-saving idea was accepted and was about to be implemented right up until it was discovered it was Cochrane's idea, and the whole thing was scrapped. The Tory government preferred to lose money and ships rather than use the opposition's ideas. And if ships sunk faster, the shipbuilders providing His Majesty with new ships certainly were in favor of the status quo. That's politics.

Much of Lord Cochrane's The Autobiography of a Seaman rails against such naval abuses and laments the aforementioned discrimination --RECORD SCRATCH!!!-- "Hold your horses, Koivu!" you might be thinking. How much sympathy and assistance does an admiral and lord need or even deserve? In the case of Cochrane, much. His lordship was a nobleman in name alone, being that he was the "second son" of a father who spent the entirety of his fortune on inventions that never struck gold. His promotion to admiral only came years later as the government and its practices changed, and even then it took a pardon by the Crown to reinstate him so he could gain his admiral's flag.

By now, if you're still reading this review, I'd say this book might be for you. It can only be recommended to those who've enjoyed the kind of historical naval fiction as mentioned above or by those who love pure naval history at its rawest. For herein are described, without affecting much drama, events like the burning of a ship that took over 600 lives. No sir, no melodrama shall be employed! The narrative uses a dry descriptive style similar to one Cochrane would've used in his official dispatches to his superior officers. Having said that, he does thankfully lace in a little more colorful detail than those officers would've thought proper.

Granted, by modern standards this is dry and most readers not used to such plain language may be bored. If you want to attempt it anyway, I suggest keeping an ear open for the true meaning of his mild language in order to visualize, for instance, the carnage he is suppressing. Think of it in the same way you imagine the horrific scenes Hitchcock refrained from showing in his films. When Cochrane says a sailor was "cut down by shot" (a concentrated cluster of large marble-sized lead balls) or that a soldier fell fifty feet from a wall and was "in bad shape", you can freely imagine the worst.

The sea actions described are interesting to those eager for insight into war stratagem. Cochrane's fight against the Admiralty and Tory government might intrigue political historians. Everyone else might want to pass on this one, though it would be a shame not to get to know a historical figure so deserving of our remembrances, one who fought against a tyrant who himself stated how much more effective Cochrane would have been had he the support of his own government. 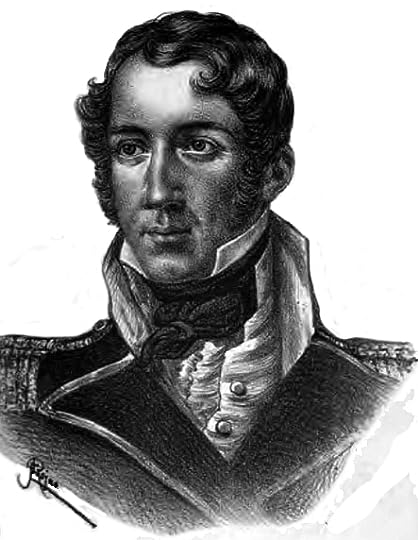 YOU GONNA KNOW MY NAAAAMMME!!!

View all my reviews
Posted by Jason Koivu at 8:00 AM