Gandhara: The Memory of Afghanistan by Bérénice Geoffroy-Schneiter
Reviewed by Jason Koivu
My rating: 4 of 5 stars

Who destroys 1400 year old gargantuan statues? The Taliban, that's who. See, this is why we can't have nice things.

The Bamiyan Buddhas, carved from the stone cliffside in the Bamiyan Valley of eastern Afghanistan, stood for fourteen centuries until a rival organized religion came along and decided it was too much of a threat. They couldn't build up their own impressive monuments. Nope, they had to dynamite someone else's, least their own grasp upon the people be impinged. 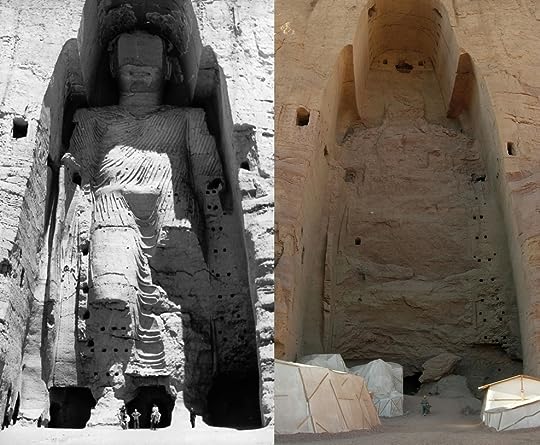 Seriously, that is such weak-sauce.

Gandhara tries to salvage something of the remains. It gives a brief, and not altogether succinct, summary of the history, surmising upon the origins of this land where Greek art met Indian Hinduism. Author Berenice Geoffroy-Schnieiter, a French archeologist and art historian, is suited to talk about the French archeologists given permission to work in the area and unearth the ruins. Perhaps something was lost in the translation or perhaps the author isn't a gifted writer (that's no knock on Berenice, I mean, how many skills can one person excel at?!) as not all of this was described in an English easily digested. Or maybe I'm ignorant of the culture and art of that part of the world. Actually, yeah, that's more likely.

On the other hand, this slim volume is two-thirds photos. There isn't a lot of room for elucidation in an 80 page book when 60 of those pages are pictures. However, the photos are gorgeous and there are summary explanations at the back giving the pertinent details of each.