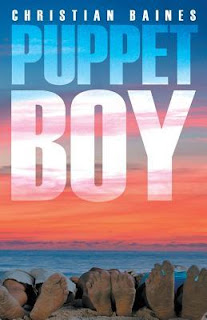 
A school in turmoil over its senior play, a sly career as a teenage gigolo, an unpredictable girlfriend with damage of her own, and a dangerous housebreaker tied up downstairs. Any of these would make a great plot for budding filmmaker Eric's first movie. Unfortunately, they're his real life. When Julien, a handsome wannabe actor, transfers to Eric's class, he's a distraction, a rival, and one complication too many. Yet Eric can't stop thinking about him. Helped by Eric's girlfriend, Mary, they embark on a project that dangerously crosses the line between filmmaking and reality. As the boys become close, Eric soon wants to cross other lines entirely. Does Julien feel the same way, or is Eric being used on the gleefully twisted path to fame?

Right from the start, I was gripped by this story. 18-year-old Eric’s mom has a busy career, leaving him alone for months at a time. All this freedom enables him to straddle multiple worlds – as a student producing one of Shakespeare’s more controversial plays, a boy toy to Margaret, an older female client, and as mate to Julien and Mary. Oh, and let’s not forget about the complicated relationship Eric has with the burglar tied up in his house and that godawful MP3 he keeps playing.

So even though there’s not a single likable character in this story, Eric’s conflicts, craziness and unpredictability kept me entirely enthralled, making me laugh, hold my breath, and shake my head in disbelief. I liked that Eric’s bisexuality is understated, yet unrepentant. I also appreciated the stellar writing which easily elevates this book into the literary realm.

This is the type of book best read without knowing any specifics, so I’m not going to spoil it for you. Just know that you’ll laugh your head off, be horrified, and question your sanity…or Eric’s.

A total mindfuck and one of the more creative books I’ve read in a while.
Posted by Nancy at 2:12 PM