Gai-Jin by James Clavell
My rating: 3 of 5 stars

”So easy to be swallowed up, by the weather and gardens, kind skies and tender rain, best music, poetry, exotic foods, abundant silks and clothes makers, exquisite carp and singing birds, the alabaster-skinned beauties of the court, and of Kyoto’s Floating World,...without a care in the world except to seek the next pleasure.” 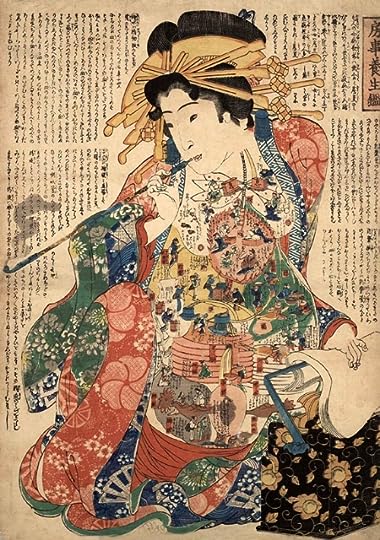 After conquering China, the traders of Europe are now focused on opening up trade relations with Japan. They are perched precariously on the edge of the Islands in a small town where ongoing negotiations with the Japanese are taking place. The traders have a loose alliance between themselves but also continue to jockey for the best opportunities. There is gold. There is coal. Fortunes could be made.

The Struans are in Japan, represented by the heir apparent Malcolm. He is the descendent of the great Dirk Struan, who built a shipping empire out of nothing but his own grit, ambition, and strong will. Dirk, though long dead, is a constant presence in the lives of the family. Every decision they try to make is weighed and measured against the interpretative wisdom of the ghost of Dirk Struan. Malcolm’s father, Culum, son of Dirk, dies young from the stress and strain of being Tai-pan and from abusing himself with alcohol. Malcolm is not yet 21, the age set by Dirk that a man must reach to become Tai-pan. His mother, Tess (Brock) Struan, is the defacto Tai-pan until Malcolm can be formally sworn in.

While on an outing with friends, Malcolm is attacked by ronin shishi Samurais and seriously wounded. This unleashes a storm of incriminations back and forth between the British representatives and the Japanese. The British navy are actually in port protecting the business interests of the traders. They are on the verge of a war with the Japanese, but cooler heads realize that they only have to wait for the Japanese to start fighting each other.

There are two storylines: one follows the Gai-jin (foreign) community, and the other follows the political battle that is taking place among the Japanese. These stories become entwined as the Japanese are forced to do business with the Gai-jins because they need their cannon, rifles, and ammunition as they prepare for the internal struggle for power that is about to begin.

Lord Toranaga Yoshi, Guardian of the Heir, is trying to be the king maker. The Shogun is a young boy, and the Emperor is a distant figure. The government is weak, and there are too many powerful, ambitious samurai who are ready to fill the power vacuum. Yoshi survives several assassination attempts just as he orders assassinations against his rivals. He makes alliances that he knows are a slender reed blowing in the wind. He needs Gai-jin weapons, and he needs them before his enemies can obtain them for themselves.

Malcolm has become infatuated with the beautiful Angelique Richaud. He is recovering from his wounds and frustrated that he cannot be the man he once was. ”Now, watching her dancing, center of a universal admiration, and lust, breasts in large part fashionably revealed, slender ankles enticing eyes to seek further under the billowing hoops of apricot silk, he felt himself hardening. Thank God for that, he thought, much of his rage evaporating.” Every man who spends a moment in her presence is in lust with her. The men, among themselves, refer to her as “Holy Titties.” She has a secret that could spoil her plans to marry Malcolm, and this brings her under the control of ”Me, André Édouard Poncin, servant of France, spymaster, killer, expert on the vileness of human nature, me the great cynic, in an instant I had fallen in love. Madness! But true.”

From all descriptions Angelique is beautiful, but it reminds me of the line from the movie Whiskey Tango Foxtrot when it is explained to the Tina Fey character that in New York she might be a 6, but in Afghanistan she is a 10. So the question remains, is Angelique a 10 in Paris or is she a 10 just on the shores of Japan?

The Gai-jin’s, coming from much more oppressive countries in Europe, are enamored with the freedom with which the Japanese conduct themselves sexually. ”There’s no such thing as sin in Japan, original sin, any kind of sin.” The men visit the brothels regularly, and much of the business conducted in this book between the Japanese and the Gai-jin are transacted in the whorehouses. Many of the men have permanent concubines, as well. Their lust is a source of exploitation for the Japanese.

The Japanese prostitutes, who work in places with such enticing names as The Floating World, are disappointed with sex with the Gai-jin men. The men are only interested in first position, commonly referred to as missionary style. These women, well versed in every conceivable variation of sex, never get a chance to show the skills they have been taught or to have the opportunity to introduce the men to Baiting the Hen, Cherry Blossom Time, Near and Far, Over the Dragon, Springtime Planting, or Stealing the Honey. Unfortunately, James Clavell does not offer definitions or explanations for what each of these intriguingly named acts would entail.

I appreciated the excitement that was created in the community when one of the men obtained something more precious than gold. ”I’ve an advance copy of the last chapter of Great Expectations.” While recovering from his wounds, Malcolm is reading The Murders at the Rue Morgue. Clavell always expresses the importance of books in people’s lives. I long for the days when books ruled supreme before the internet, video games, TV, and movies became the preferred forms of entertainment for most people.

This is a beast of a book, with 1000+ pages and with what feels like a hundred characters. In this edition, James Clavell provides a character list in the back of the book with a short description for each person. Because I read this over a longer than normal period of time, it was nice to be able to easily refresh my memory by taking a peek at the list. Clavell has never managed to create characters as compelling as Dirk Struan and May-May in the novel Tai-pan. Tess Struan, the mother of Malcolm, comes the closest, but she is in Hong Kong for the entire period covered by this book. She is the daughter of Dirk’s arch rival, Tyler Brock. She is a tough, determined, compelling woman, often referred to as The Hag, who is completely allied with Struan despite her blood relation to the Brocks. She is quite capable, with just a hiss of displeasure, of making a man’s “balls jump.” So even though she is not in Japan, her influence crosses the waves and continues to make men nervous who are making decisions she may question.

I never did warm to Culum or Malcolm; both are pale comparisons to Dirk. Both felt the pressure of trying to live up to their illustrious ancestor. I have high hopes that Ian Dunross, the Tai-pan of Struans in the book Noble House, will finally provide me with the strong willed, smart, cunning character I so adored in Dirk Struan. I did break one of my unwritten rules by watching the miniseries based on Noble House before reading the book. If Pierce Brosnan’s portrayal is any indication, I do believe I will find Dirk finally alive and well in Ian Dunross.

Despite my issues with the characters and the length of the book, I still enjoyed the journey. The intrigue developing between the Japanese and the constant friction between two diametrically opposed cultures kept the pages turning. As Angelique wraps Malcolm around her little finger, we can see a showdown coming between the beauty and the hag. I wouldn’t recommend this book for anybody except the most die hard Clavell fans. As I mentioned before, I highly recommend Tai-pan and then Noble House before attempting to read Gai-jin.

This book is subtitled the Epic of the Birth of Modern Japan, and that it is, by God.

Posted by JEFFREYKEETEN at 2:22 PM