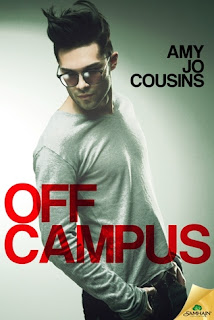 Everyone’s got secrets. Some are just harder to hide.

With his father’s ponzi scheme assets frozen, Tom Worthington believes finishing college is impossible unless he can pay his own way. After months sleeping in his car and gypsy-cabbing for cash, he’s ready to do just that.

But his new, older-student housing comes with an unapologetically gay roommate. Tom doesn’t ask why Reese Anders has been separated from the rest of the student population. He’s just happy to be sleeping in a bed.

Reese isn’t about to share his brutal story with his gruff new roommate. You’ve seen one homophobic jock, you’ve seen ’em all. He plans to drag every twink on campus into his bed until Tom moves out. But soon it becomes clear Tom isn’t budging.

Tom isn’t going to let some late-night sex noise scare him off, especially when it’s turning him on. But he doesn’t want any drama either. He’ll keep his hands, if not his eyes, to himself. Boundaries have a way of blurring when you start sharing truths, though. And if Tom and Reese cross too many lines, they may need to find out just how far they can bend…before they break.

As an older college graduate, dorm life was one of those experiences I missed. I know people who enjoyed that time of their life, and others who hated it. To an introvert like me, living with a randomly selected roommate in a cramped room, communal bathrooms, noise, and lack of privacy sounds like hell on earth.

While I have no regrets about missing the dorm experience, I periodically enjoy reading about college life and the confusion, emotional turmoil and insecurity that plagues young adults.

Tom Worthington uses his car as a cab to help pay for his tuition costs. Unfortunately, he doesn't have much else in the way of money or possessions, as his dad’s fraudulent scheming left victims penniless, resulting in frozen assets and a jail sentence. Tom is deeply affected by his father’s actions and tries hard to keep a low profile around campus. He has difficulty trusting others, is unable to ask for help, and fears people are gossiping about him.

Tom didn't get the single room he was promised, so he is forced to bunk with Reese Anders, a 20-year-old gay man who has his own reasons for wanting to be alone.

In spite of the men’s unwillingness to share a room, Tom and Reese develop a tentative friendship that eventually gives way to mutual attraction. It’s not as easy as it sounds, though, because Tom and Reese are very private people with unresolved issues.

I nearly set the book aside, because I quickly tired of the random sex scenes and wasn’t warming up to either Reese or Tom. Thankfully, I was patient, for I was rewarded with a moving, powerful story that felt so real. Tom’s and Reese’s problems were dealt with very sensitively without resorting to clichés and pounding the reader over the head with “important life lessons.” I especially enjoyed that friendship, trust and love took time to develop. Reese and Tom know they each have difficult hurdles to overcome and need more than love to make their relationship work. Significant secondary characters like Tom’s best friend, Cash, Reese’s friend, Steph, and Reese’s dad kept Tom and Reese from being too isolated and helped infuse this story with lightness, humor and love.

This is my first book by Amy Cousins, but it certainly won’t be my last. I’m looking forward to spending more time with Reese and Tom’s friends and getting a glimpse of their future.
Posted by Nancy at 3:31 PM