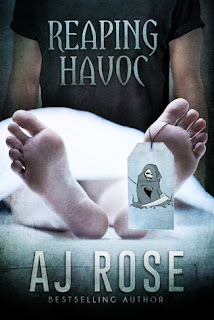 A.J. Rose
The Grim Writer Press
Reviewed by Nancy
4 out of 5 stars

No one asked Mitch Seeker if he wanted to be a grim reaper. He didn’t sign up for the rumors, the lack of friends, or the erratic schedule. He doesn’t want to go through life watching people die. Especially not a man he loves. Mitch’s solution is simple—don’t fall in love. He’ll never have to explain why he doesn’t age or why he’s around death so often. Most of all, he will never be a widower.

But when his head is turned by world-class skier Nate Koehn, Mitch believes he may have the answer. If the soul attached to Nate is any indication, Mitch has found himself another reaper, in which case, his undeniable feelings don’t have to be suppressed. However, the spectral tag-a-long is only the beginning of Nate’s burdens. After a catastrophic loss, Nate is no stranger to grief and the hole it leaves behind.

The question they both must answer is loud and clear: is the pain of losing love worse than the pain of never having loved at all?

Mitch Seeker longs to have a normal life, but his job as a reaper prevents him from doing so. His family has aroused suspicion in the inhabitants of the small town in Colorado they call home. Every time someone dies, you can count on any one of the Seeker family members to be around. It’s not as if Mitch volunteered for this job either. A major screw-up and a deal made with a demon by a distant relative back in the 1670’s ensured that all future male descendants begin their reapership on their twenty-fourth birthday.

Mitch’s life becomes complicated when he meets Nate, an Olympic skier who is new to town and looking to start a new life after the tragic death of his twin sister, Tate, in a skiing accident. Nate’s only friend, a cop named Wes, is deeply suspicious of the Seeker family and encourages Nate to steer clear, but Nate is not having any of that.

Though there are death scenes and spectral beings throughout the story, there are no real horror elements here.

This was a fun and delightfully quirky story that explores love, death, family relationships, friendship, and grief without wallowing in drama and sadness.

Both men have lots of issues to deal with and it was fun watching them fumble through difficulties and eventually grow and discover themselves and each other.

At times, I found their interactions bland and the story a little sluggish through the middle. Thankfully, there was a cast of secondary characters that popped off the page and kept the story moving along.

Overall, I enjoyed this and look forward to more of Mitch and Nate.
Posted by Nancy at 2:46 PM