The Strength of a Man 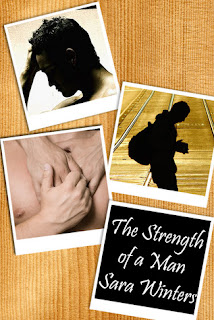 Kurt Dennings learned one life lesson the hard way: love, even between a parent and child, is not always unconditional. After coming out and experiencing a painful rejection from his parents and friends, Kurt feels as if he's lost everything that mattered.

James Theard comes into Kurt's life when he needs someone the most. A friend first and boyfriend second, James becomes his shoulder to lean on, a voice of reason and helps Kurt learn he is stronger and more capable than he imagined.


Kurt Dennings is a college freshman and a good swimmer with a lot of potential. James Theard is the swim team captain who volunteers to help Kurt refine his technique and get him in shape for the team’s first match. What holds Kurt back is a lack of confidence in his abilities, and the feeling that Coach Davis’ decision to take him on the team was influenced by his friendship with Kurt’s father. As if that’s not enough, Kurt recently came out to his parents and close friends and is hurting deeply from their bitter rejection.

James is very attentive and really wants Kurt to succeed. He is also very perceptive and knows that something more is going on that is keeping Kurt from staying focused. There is an attraction that James struggles to keep under wraps until he is more certain about Kurt’s feelings. I love the gentle flirtation, blushes, and the instructive touching to show Kurt just which muscles he needs to use more effectively.

As the two young men get to know each other, Kurt reveals the anguish caused by his family’s rejection and Kurt offers support and friendship. I liked the slow progression of their relationship and James’ desire to be a friend first. When Kurt’s mother finally starts to come around, their interaction is heartbreaking. His mom was very well developed and showed a wide range of reactions from shock, denial, anger, hurt, rejection, and gradual acceptance.

James is a really good guy and doesn’t take advantage of Kurt’s youth and inexperience. At times, he felt a little too perfect, but Kurt has had such a bad time between his family’s rejection and the problems in his past that keep James and Kurt from achieving total sexual intimacy that I was glad for his supreme patience and understanding. Still, I would have liked to feel more of James’ frustration.

I loved the swimming details and would have liked to see more focus on Kurt’s progress. Kurt’s other problem, while handled very sensitively, was a little much for a story of this short length and made me feel overwhelmed.
Posted by Nancy at 10:00 AM