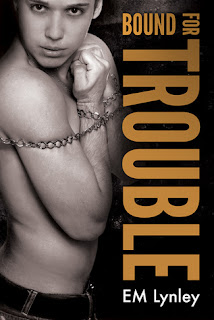 Daniel "Deke" Kane is a broken man, facing the end of his career in the FBI. He's on desk duty after a botched drug raid left the suspects and two children dead. He's got one chance to prove himself, or the only thing he'll be investigating is the Help Wanted ads.

Ryan Griffiths has been on the run for ten years. Forced onto the streets when his father kicked him out, Ryan earns his living in other men's beds. Finding his john dead in a hotel room drives him under the radar until a favorite client gives him a chance at a safe, clean life. But Ryan's relatively stable new world shatters when Deke Kane catches up with him.

Now Deke has to choose between Ryan's safety and his own future.

FBI agent Deke Kane was nearly up for a promotion, but screwed up disastrously during a drug raid, causing the deaths of two children. Now he’s desk bound, once again having to prove his worth to his bitchy and flirtatious supervisor, Serah, and to himself.

He gets a second chance on a high-profile case involving Maksim Petrov, a Russian arms dealer with terrorist ties. Though the higher-ups are hoping Deke makes another mistake so they can justify firing him, Serah micromanages every aspect of his investigation in order to keep her record clean.

Deke knows that Petrov frequents the Club Kiwi, a male strip club. His best option is to send in a confidential informant, Ryan Griffiths, a former stripper now gainfully employed in retail and trying to forget his old life.

This is not a simple cop/rent-boy love story. Deke is focused on the investigation while exploring his kinks and watching Ryan fall under Petrov’s spell. As Deke’s feelings for Ryan grow, he becomes more and more concerned about the role Ryan is playing, his desire for pain, and the dangers they face.

Since Ryan and Deke have not spent a lot of time really getting to know each other, it was hard for me to believe their love was real. The investigation details were riveting, but the plot was over-the-top and not very believable. There is a smidgen of graphic violence and lots of kinky sex.

As much as I enjoy hot sex scenes, I need to be emotionally invested in the characters. I wasn’t.
Posted by Nancy at 8:15 AM