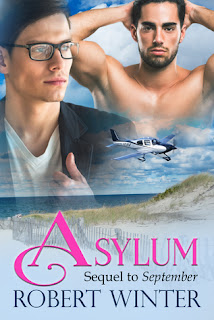 Death threats drove him from his country. Can he ever find asylum from his past?

Hernán had family, college, and a future in El Salvador. Until a vicious gang targeted him as gay. Threatened with murder, he braved a nightmare journey toward a new life. Now, haunted by his trek, he hides from immigration trouble as well as his enemies. He prays to pass in Provincetown unnoticed.

But a handsome man with a secret like Hernán’s is vulnerable to predators.

Colin is in town for a wedding when he falls into the harbor. The man who rescues him is dark-haired, dark eyed and gorgeous. He’s also a target because of his immigration status. Colin owes a debt, and wants to repay it by helping his savior escape the monsters who would exploit him.

Hernán yearns to trust the kind man who offers him sanctuary. Will his demons destroy his chance at a future with Colin?

I’ve read all but one of Robert Winter’s books and loved them. I jumped at the opportunity to read Asylum, even though it is the sequel to September, the one book of Winter’s that I haven’t read yet. I was assured this is a standalone story, so I jumped right in. Apparently, there are some spoilers for the first book, but I didn’t feel bad about reading out of order. This just makes me even more excited to get my hands on September.

This story starts with a drunken plunge into Provincetown Harbor. Though Colin is happy his best friend, Brandon, is getting married, the event is a bittersweet one as he remembers he had feelings for him. Hernán, who is from El Salvador and now illegally in the US, happens to be nearby and saves Colin. The attraction is instant, but their encounter is brief. Hernán is guarded because of his past and his immigration status. Colin works for a non-profit organization that helps immigrants and has an opportunity to help Hernán. Colin knows he is vulnerable, particularly when he overhears a threatening conversation while dining at the restaurant Hernán works at.

The author has based Hernán’s story on true events. There were times I felt I was being beaten over the head with a message, but the details of Hernán’s persecution by a gang and violent attack because of his sexuality, the harrowing journey to the US and the abuse and deprivation he suffered at the hands of smugglers was gripping and utterly heartbreaking. Even though my views on immigration lean toward the conservative side, I couldn’t help but root for Hernán and hope he finds safety, peace, and love in the US.

Colin comes from a very wealthy family and keeps that fact well hidden, even from his closest friend. He doesn’t want to use his skills in the family business. His true satisfaction comes from helping others. I love his determination to fight on Hernán’s behalf and the growing attraction between the two men. They have hurdles to overcome and trust takes time, particularly considering Hernán’s history. Their love scenes were deeply passionate and sensitively rendered. I liked how they work through difficulty openly and honestly, without unnecessary angst.

The ending felt a little rushed. Otherwise, this was a well-written, engaging, and thoughtful story.
Posted by Nancy at 5:00 AM