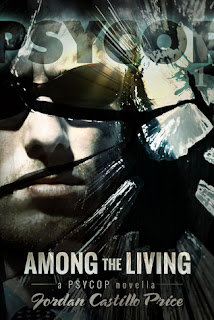 Victor Bayne, the psychic half of a PsyCop team, is a gay medium who’s more concerned with flying under the radar than in making waves.

He hooks up with handsome Jacob Marks, a non-psychic (or “Stiff”) from an adjacent precinct at his ex-partner’s retirement party and it seems like his dubious luck has taken a turn for the better. But then a serial killer surfaces who can change his appearance to match any witness’ idea of the world’s hottest guy.

Solving murders is a snap when you can ask the victims whodunit, but this killer’s not leaving any spirits behind.

Among the Living is told from the perspective of Victor Bayne, a cop in Chicago’s Paranormal Investigation Unit. He is a Class 5 medium, with the ability to communicate with the dead. At the start of the story, Victor is attending a retirement party for his former partner, Maurice. He nearly crashes head first into Detective Jacob Marks, who eventually becomes his lover, and gets called in to investigate a very unusual homicide.

Victor is assisted by his new partner, Lisa Gutierrez, a cop who is not quite what she appears to be, Jacob, and his partner, Carolyn, a psychic investigator who is able to detect lies.

This is a very well-written, fun, fast-paced and suspenseful story that is the first in a series. Victor is not very comfortable conversing with the dead and takes pills to suppress his abilities. He is flawed, lacks self-esteem, hates shopping for clothes and is self-centered. Jacob is gorgeous, sexy, a sharp dresser, and hot for Victor. These two very different guys made a perfect pair, and I enjoyed every moment with them as they successfully solve a series of homicides and develop a relationship.

There are a few well-written sex scenes, but Among the Living is not a traditional romance where the main focus is on the physical and emotional relationship. Jacob and Vic are busy guys...there are crimes to solve and wayward spirits to deal with, but they do make time for love.
Posted by Nancy at 9:00 PM