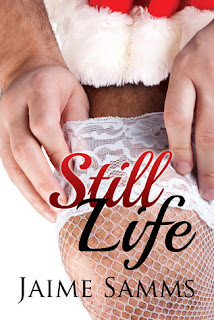 When Allan Song’s ex, Mac, shows up to model for the life drawing class Allan teaches, he turns everything upside-down. Mac is still as infuriatingly attractive as when Allan first met him—and still trying to figure out where he fits on the gender spectrum. He’s more than a little out of control, and he’s taken some stupid risks that have come back to haunt him. If they’re going to get back together, Allan wants a real relationship—but for that, he and Mac will need to look below the surface.

I thought this was going to be a light, sweet Christmas romance. I’m really glad it wasn’t, as I’ve overdosed on holiday sweetness and am now craving conflict, intense emotions, and deep feelings. Jaime Samms delivered and after reading just one story, I now count myself among her fans. I also liked that the blurb for the story was kind of vague; still intriguing, but not enough to reveal too much information about the characters or spoil the plot.

Allen has known his roommate, Mac, for two years. Allen has always liked men, but Mac is straight, well at least until he starts flirting playfully with Allen while he’s working on his term papers and distracts him even further by coming out of his room in a dress. Jump ahead a couple of years to Allen’s classroom, where he is teaching art and Mac is the life drawing class’s model. By this time, the men are living separate lives, even though it is obvious they haven’t moved on.

It was just a small incident that caused Al and Mac to break up during a family visit at Christmas, but alcohol, flirting, insecurity, and stubbornness have blown the incident out of proportion and created a huge rift not only in Al’s and Mac’s relationship, but in Al’s relationship with his family.

The men are in for difficult times as they try to reconcile their differences and move forward. They are stubborn, hurtful and unwilling to bend. Despite all that, they are deeply in love with each other. A pregnancy, a death and the possibility of a major life-changing event conspire to bring the men back together. As they begin to admit their wrongdoings and deal with the consequences of their actions, they will become stronger individually and as a couple.

This story is far from a typical romance. Relationships, family life and friendships are explored realistically and a wide spectrum of emotions portrayed. I thoroughly enjoyed this story and loved both Mac and Al. I hope they have the strength to face the challenges ahead of them.
Posted by Nancy at 8:30 PM