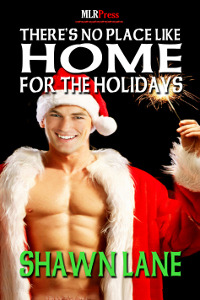 Fashion designer, Mackenzie Grayson, has no intention of going home for Christmas...until his sister calls and uses guilt to talk him into spending two weeks over the holidays at his family's home in California. With his best friend, Connor, in tow, Mac returns to California, a place he has mostly avoided after a bad breakup. Mac no longer does serious relationships, but maybe some time spent with Connor under the mistletoe will make this a more magical Christmas than either of them would have dreamed of.

Shawn Lane is my go-to author when I’m looking for something sweet, sexy and uncomplicated. This story is the perfect holiday read.

Mackenzie Grayson missed Christmas with the family last year. This year, his sister wasn’t going to have it. She wants the whole family together, including Karl, her husband’s brother. Mac had a brief fling with him a couple of summers ago and worries things could be a little awkward when they meet again, even though both men were not looking for anything serious. After a bad breakup with a man he loved, Mac vowed not to get emotionally involved with anyone again.

Over dinner, Mac decides to spring the news of his holiday plans on his best friend, Connor. A couple of days before his departure, Mackenzie learns that Connor ‘s boyfriend broke up with him and he arranges a plane ticket so Connor can spend Christmas with him and his family.

Connor is absolutely adorable! His bouncy personality, curly hair and bright green eyes were a contrast to Mac’s seriousness. It is obvious that Mac loves him, even though their relationship has never moved beyond friendship.

I loved how Mac’s mother put Mac and Connor in the guest room with only one double bed and a sprig of mistletoe in the kitchen with that special wisdom mothers have. That combined with a bit of eggnog and Christmas spirit made Mackenzie realize that special someone was with him all along.

This is a very cute story that made me smile.
Posted by Nancy at 3:03 PM