"Crisis" by Felix Francis is a good murder mystery in the vein of Dick Francis, just not as good 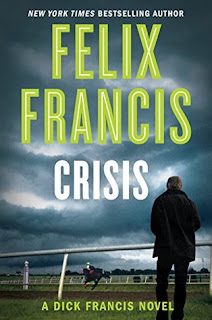 What if Dick Francis never wrote novels and what you started with was a Felix Francis novel. When do we stop comparing the son to the father. Their styles are completely different. Dick Francis wrote in your face, mano a mano novels where the hero set out to defeat a evil plot in the horse racing world, typically taking the evildoers to the cleaners himself, but not before he faced extreme pressure to give up. As I have said before, a Felix Francis books lacks the early Dick Francis's pacing, wording and ties to horse racing, but he does know how to paint the numbers. He has overcome the stylistic differences between his writing in some instances. I felt, however, that this was not one of them.

"Crisis", Felix Francis latest murder mystery set tangentially in the English horse racing world, has a good little murder mystery at its heart and a decent hero sort, who shows some spine and lust. But this is just a good book, nothing spectacular and maybe that is what we should continue to look forward to.

There is a lot of good horse racing information. From a brief walk through of an auctioneer area, to morning gallops of the trainers and information about signing horses up for runs. But the information is dropped (info dump style) in as if we are observing from afar or reading something written just to be inserted therein. It lacks punch and vitality. In one instance, the info dump does not even advance the story at all.

Harrison Foster, the nattily dressed hero is a "crisis manager", who is investigating the death of seven horses trained by Ryan Chadwick at a training yard that used to be owned by his father Oliver Chadwick. Tony Chadwick is a jockey who rides for the family. The horses are owned by Foster's client Sheikh Karim. He soon learns that human remains were found at the scene of the fire, and picks up another client, Declan Chadwick, Ryan's brother who is suspected of killing the victim, who turns out to be a relative of the Chadwick men.

While the early going of the book establishes Foster's bona fides and that he knows nothing about the horse racing world, it takes a little time to do so, but reads okay.

But Francis's book bogs down in the middle because he telegraphs "Why" the victim of the crime was suffering psychotic episodes way too early and the "Who" is limited to just a small coterie  of the Chadwick men Also, the novel feels a little too soap opera like. Feuding brothers, dominating father, cowed mothers, women in their cups way too early in the morning, the tropes are standard mystery fare.

Its been said many times that Dick Francis mostly failed to have female love interests in his novels. But Felix Francis has never been shy to include some love interest, so this book also has Foster finding true love.

Foster will be stuck in a barn with a violent horse, and has all the spine of previous Francis heroes and will have to use some wit to figure out the killer but it takes a long time coming.

Not my favorite read.

But if you never read a Dick Francis novel, maybe you will be satisfied with this work.

But for the rest of us, its a good mystery, but not a "Dick Francis Novel"
Posted by Jeffrey Wendler at 1:10 PM