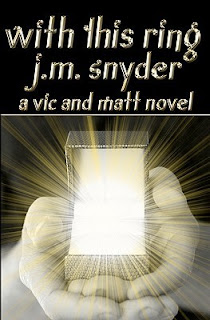 Matt diLorenzo’s ex, Jordan, confesses all to a tabloid, telling the world Matt’s secret—something in his semen gives his sexual partners super powers. After the article appears, Matt expects all sorts of weirdos to try to track him down, but the only call he receives is from a research scientist at a local condom factory who claims to have a solution to his little “problem.”

The offer is tempting, since the powers Vic Braunson receives from Matt during their lovemaking sessions are unpredictable and scary. Matt wants to keep his lover safe, and is eager to hear what the scientist has to suggest. And Vic is willing to try the cure and lose his superhero abilities for his lover’s peace of mind...even if it means losing the special mental connection they share, a bond formed by the powers, a bond that has become such a part of their lives that neither is quite prepared when it suddenly disappears.

Then Vic discovers that the scientist has an agenda of his own. Can he protect Matt, even without his super strength or their mental bond?

After 5 years together, Vic grew accustomed to the superpowers bestowed on him every time he and Matt made love. Matt worried that his powers would eventually harm Vic. When an Indian researcher reads about Matt’s superpowers in a tabloid magazine, he contacts him and offers a cure. Matt wants to get rid of the powers and live a normal life, so he willingly accepts the offer.

The cure works, but neither man is prepared to deal with the fact that they can no longer communicate telepathically. Doubt and insecurity creep in until Matt decides to visit the doctor so he can make an adjustment to the “ring” that would allow Matt and Vic to keep the telepathic powers, while ridding themselves of the other undesirable ones.

As Matt will soon learn, the “doctor” is not what he appears to be. Vic will have to use every means at his disposal, minus his superpowers, to save Matt from a potentially dangerous situation.

I really enjoyed this fourth installment in the Powers of Love series. Vic's and Matt’s growing love for each other is always very sweet and satisfying. It was nice to see Vic’s boss has a softer and more compassionate side, and I loved how Matt fought off the security guards roughing up Vic.
Posted by Nancy at 9:17 AM