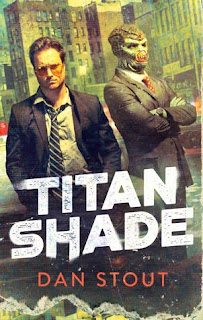 What do you get when you mix alien murder, dark world building, a retro 70’s aesthetic and elements of magic and science fiction?  If you are lucky, you will be reading “Titanshade”, Dan Stout’s entertaining debut novel which combines politics, murder, aliens, magic and a charging plot in a boomtown city on the edge of catastrophe. It’s a mix of cop cars and dying magic, disco music and necromancy.  And a great portrait of a cop who lives for the hunt and solving crimes.  Stout’s gritty hero is Carter, a homicide cop, who is always in trouble with the brass, but finds the investigation of the murder of a Squib diplomat has far reaching consequences for his city and the people who live there.  Stout’s writing is spot on and the noir detective story with magic and modern technology works really well.

The Squibs are an alien amphibian race who live and work in Titanshade, a boomtown, which has been awash in a sea of greenbacks from the discovery and oil drilling.  But what happens when the oil runs out.  Cities try to get a new investment and reinvent themselves. Titanshade is deep in negotiations with a Squib delegation, who are interested in making a new investment in Titanshade by turning the oil fields into wind farms, when one of the members turns up dead in a sleazy hotel. This is not a novel for the squeamish, as the victim seems to have been involved heavily with human and other alien prostitutes.

Carter has been joined on the case by Ajax, a young Mollenkampi, another alien race that made its home in Titanshade.  As part of the investigation, Carter calls on the services of DO Guyer, a magic user, who can, with the use of manna, examine the entrails of a dead person or even call up the dead through a type of necromancy.  Manna, a magical substance used to power spells, that once was abundant in Titanshade, is also disappearing from the city, making all magical spells much more expensive. As a reader, unless you are in a world of total magic, the less magic that is used in a world the more believable the world becomes. Magic is like having a superhero run rampant through your story. So Stout’s limited use of magic in the story increases the velocity of the cop elements of the story by focusing it on investigation and not miraculous cures.

The Titanshade elites want the investigation wrapped up quickly, but Carter will not be pushed into arresting the wrong perp.  And there are a lot of crimes going on. An entire family is murdered. Is it connected?  The elites want it to be.  And there are a lot of power players.  Ambassador Paulus, a leader, and prime magic user in the government and her assistant, the diplomatic envoy Gellica, who has her own secrets, soon reveal themselves to be involved in some way.  Harlan Cedrow, the current head of one of the old oil families, who has the most to lose from the oil field devastation,  and there is Flanagan, a disgraced ex-cop, who has fallen in with a religious cult.  Carter takes a flame thrower approach, everyone who touches the investigation is burned.

Stout mixes all of the elements well and sets his bulldog investigator to follow the clues to the killer. It’s a complex investigation, but Carter is not going to walk away.

This is what we as readers want in a cop story set in an alien landscape peopled with interesting characters and situations.

It is a find. Go discover it.