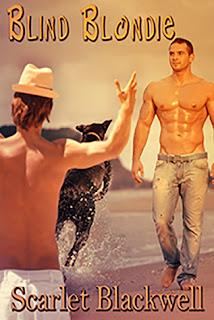 Artist and playboy beach bum Sam's life is turned around when he meets blind Kieran and falls hard for him. Kieran is fiercely independent and doesn't need a man like Sam in his life. But Sam needs a man like Kieran and it's up to him to persuade Kieran he's worth a shot.

This story is told by Sam, who happens to be cruising down Main Street in the summer, catching glimpses of the gorgeous male bodies strolling around. Right away he spots Blondie, carrying a walking stick and using a sign to hail a taxi.

Sam pulls over and learns Blondie is on his way to the animal hospital. Blondie is gorgeous, but Sam doesn’t need the hassle of dealing with a blind guy or his dog, so he drops him off, never expecting to see him again.

Blondie knows Sam is no cab driver and calls the cops to prevent him from picking up other vulnerable people. After the cops pay him a visit, Sam is furious with Blondie and knows he should forget about him, but it’s just not happening.

Sam continues to pursue Blondie and is rejected at every turn. It takes a lot more than bribing a prickly concierge, a dog toy, flowers, and gifts to warm Kieran’s heart and melt his resistance. Kieran is perfectly capable of taking care of himself and knows that very few men are interested in dating a disabled guy. Sam is persistent, however, and won’t give up until Kieran relents.

This was a thoroughly enjoyable, funny, sweet and heartwarming romance. Blind guys need love too.