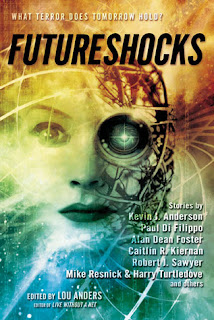 Overall, an enjoyable collection of stories that offers diverse visions of the future.

★★★★★ Shuteye for the Timebroker by Paul DiFilippo – One of my favorites in this collection. An exploration of the effects of anti-somnolence drugs on a near-future society. Sure, people can increase their effectiveness and accomplish more, but there is always a price to pay.

★★ Looking Through Mother’s Eyes by John Meaney – Told from the perspective of a newborn who is aware of its own birth and the effects on both parents. Nicely written, but kind of icky. I don’t enjoy stories about pregnancy.

★★★★ The Man Who Knew Too Much by Alan Dean Foster – In the future, acquiring knowledge is as simple as downloading data directly to your brain. There is a limit, however, to how much information one’s brain can process at once. In the hands of specialists, knowledge is disseminated gradually without danger to the recipient. Some people, however, are just not satisfied and crave all the world’s knowledge much as an addict craves drugs.

★★★ The Engines of Arcadia by Sean McMullen – A man builds a time machine to escape his dull, safe life only to find that millions of years later, some things never change.

★★★★ The Pearl Diver by Caitlin R. Kiernan – Recurring dreams, the consequences of deleting unread company correspondence, and transformation. A sad and lovely story.

★★★ Before the Beginning by Mike Resnick & Harry Turtledove – A humorous story that shows why God’s chosen people have lasted so long.

★★★★ Man You Gotta Go by Adam Roberts – An AI is enlisted to help solve the problem of FTL travel. Human consciousness becomes obsolete. A little long and drawn out, but interesting and thought provoking.

★★ Homosexuals Damned, Film at Eleven by Alex Irvine – A bleak and sad story that portrays the downside of living in a theocracy. A geneticist who attempted to save the life of his son fears he may have caused his death. I may have liked this story better if it was longer and the characters more developed.

★★★★Contagion by Chris Roberson – Jaidev Hark is a Vector employed to carry data-encoded retroviruses in his blood. He lives in a society divided by castes; the higher the caste, the more they can afford protection from disease. Pursued by data-thieves, he reveals to his employer that they are looking for Panacea, the mythical (or is it?) cure of every human infirmity. In order to survive, he goes to work for the other side. This is a thought-provoking story that makes me wonder about the dreadful state of our health care system and if we will ever achieve affordability and equity.

★★★★Absalom’s Mother by Louise Marley – This hard-hitting and powerful story moved me to tears. In a society where children as young as 11 are drafted for service, a group of mothers hides their children and volunteers to go in their place. The characters are strong, rich, and vibrant.

★★★Job Qualifications by Kevin J. Anderson – Politicians have to work hard to be all things to all people. In the distant future, Berthold Ossequin’s clones help to make him a more suitable candidate for grand chancellor of the United Cultures of Earth.

★★★★The Teosinte War by Paul Melko – After reading Melko’s novel, The Walls of the Universe, I knew I could count on him to write a fun and thought-provoking story about the bad things that could happen when an ambitious professor uses an MWD to mess around in other universes and involves his TA, Ryan Greene. Though Ryan is kind of a jerk, he is ultimately a sympathetic character as he witnesses one disaster after another and learns that one can’t play God.

★★Slip by Robert A. Metzger – Getting what you ask for doesn’t always result in a positive outcome.

★★All’s Well at World’s End by Howard V. Hendrix – Memory erasure, annihilation. It would have been more interesting if too many scientific terms hadn’t made my eyes glaze over.

★★★★The Cartesian Theater by Robert Charles Wilson – A performance artist uses advanced technology to duplicate living creatures. This chilling story explores life, death, and the question of the soul’s existence.
Posted by Nancy at 9:33 AM