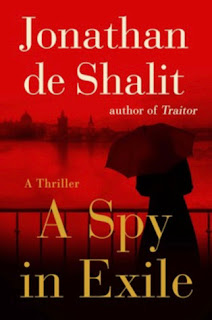 Starting with the title, it’s a bit of a misnomer. Although there is some spying, the novel is essentially about special agents of Israel, who are tasked with taking out Israeli’s enemies- that is killing them. Assassination, wet work and counter intelligence. Spying is generally considered government sanctioned watching and recruiting of people for the purpose of ferreting out information that may be harmful to the country the spies work for. There is another group of special forces that work for countries as well. Seal Team 6, Delta Force and other counter- terrorist forces of the USA are tasked with fighting external threats. But they are uniformed soldiers. Not a hit squad who operates in the shadows.

Which brings me to the latest book by Jonathan de Shalit, the misnamed “A Spy in Exile”. De Shalit, a former Mossad agent writing under a pen name, latest novel is about Ya’ara Stein and her assassin squad. Clearly, the title could be better, but, its likely calling the heroes assassins or a hit squad would be problematic. So I am sure that is why it’s called “A Spy in Exile”.

The novel has two main operations set in the near present involving Stein’s hit squad. But de Shalit, also has tied Stein’s story to another story set in the past, which naturally links up to Stein’s story plotline in the last part of the novel. The past thread in the story is about Yosef Raphael, a sculpture in post-World War II London, who has been recruited by Israeli intelligence to help the nascent state against its enemies. It’s a winding thread of a story episodically interspersed during the main novel parts. The tie-in does make for an interesting digression and casts some of Stein’s actions in a more positive light at the end of the novel.

Stein, who has been kicked out of Mossad for taking vengeance into her hands in a prior book, is asked by the Prime Minister of Israel, to recruit a hit squad of special agents, who will go after Israel’s enemies and take them out. The squad will be “off the books” only beholden to the Prime Minister. Israel will show that it is a force that punishes its enemies. De Shalit does a good job of fleshing out his characters. There is Ann and Helene’s romantic relationship, Sayid, the Arabic Jew, who is trying prove himself and Nufar, the daughter of a criminal, who became a hacker for Israel cyber forces and now is looking for more. The members of Stein’s squad are a diverse group, who have real feelings and thoughts. De Shalit clearly captures these feelings. But all of this fleshing sometimes turns too much to introspection and a psychological deep dive into the characters. It’s a little bit of a slog to get through all of this introspection and feelings. Interspersed in the novel are two or three instances of ruthless violence. But it’s not enough to sustain the idea that this is a “thriller”. It’s a slow read at best.

After learning about the members of the squad, Stein takes them to Germany to train. While training, Stein is approached by an old colleague, Matthias Geller, who is the head of BND’s Hamburg Station. Geller has lost a lady love, who entered his life, lived with him briefly and then disappeared. Stein understands that this woman could be a problem. If she was a spy, Geller’s career could be in jeopardy. So she starts to look into the woman and her squad investigates her background. Using Israeli assets and other tools, Stein and her team discover that the woman has a familial relationship to a famous terrorist group that operated in Europe in the past. They also discover that she may have been recruited by Russian operatives, who are planning to use old terrorist’s family members to commit bombings and other atrocities in Europe. Russia wants to show the West that it too can act with impunity but not be tied to the acts. Stein’s group ends up thwarting the woman’s individual group’s plan for an attack, but not before Stein takes extreme actions and torture against her to thwart the plan and to protect Matthias. It is cold blooded but that is why Stein, who was chosen exactly because of her ruthlessness, was recruited by the Prime Minister.

In the second operation, Stein’s group is given what appears to be two kill orders against enemies of the Israeli state. Although it’s not completely clear whether there was one kill order and one operation just decided on by Stein because the target hurt her family. One of the targets is a convicted felon already in custody in Europe. The other is an Iman, who has spread hate and discord. Stein plans two operations to take them out. In one of the operations, a young child in Britain will be killed, and although Aslan and other members of the squad are troubled by the inadvertent death, Stein feel this “collateral damage” is warranted. War is messy. But you do not expect your allies to kill innocents. You will have to make up your own mind about whether this is an acceptable outcome.

The British are not happy with the operations or deaths of their citizens on their home turf and will go hard to find the culprits. Meanwhile Mossad will also investigate the operations, as the outcome against the Iman took out a valuable British double agent. So the last part of the novel will be Israel’s investigation of Stein and the tie-in with Raphael in the past.

The novel was a bit of a slow read. Not that thrilling. Too much introspection for my taste. While the writer surely knows the trials and tribulations of the special agents that make up the spy organizations of the world, it was not that enjoyable to read about it. Stein displays an inherent ruthlessness that stands in marked contrast to the more introspective members of her squad. In some ways the novel punctures the belief that Israel acts heroically. De Shalit makes the point that some innocents’ deaths are acceptable in order to keep Israel safe from its enemies It’s a hard lesson, that de Shalit tries to lessen with the final actions of Stein, who acts to keep Raphael’s last secret safe.
Posted by Jeffrey Wendler at 4:34 PM