Last Call for an Awful lot of People... 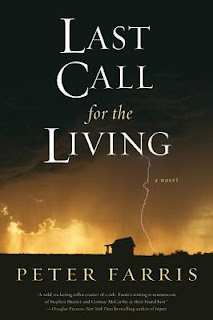 This is a must-read book for those who like their crime fiction dark, violent and unrelenting, populated by characters almost all of whom are lost in one way or another, and very few of whom will be redeemed in the end.

Charlie Colquitt comes from an extremely broken home. He's shy, withdrawn, physically unappealing and interested in little more than the model rockets he builds and flys. He supports himself by working as a teller at a small branch bank, and it's his serious misfortune to be on duty early one quiet Saturday morning when a ball-busting, Aryan Brotherhood gang member named Hicklin kicks in the door and robs the bank. Hicklin shoots and kills the manager on duty without a second thought and drags Charlie out of the bank as his hostage.

Hicklin drives Charlie to a remote cabin in the Georgia woods and ties him to a chair. Also in residence is Hicklin's girlfriend, a meth addict whose brain has been fried down to the size of a pea. The woman takes pity on Charlie for all the good that will do him.

It turns out that the heist had been carefully planned by imprisoned AB gang members. It was to be executed by Hicklin and two equally depraved compatriots. But Hicklin jumps the gun by a week, taking all of the score for himself, apparently in the fantasy that he will use the money to run away to Montana and start a new life.

Unsurprisingly, the rest of the gang is not happy.

The thugs that Hicklin betrayed are now hot on his tail, and will deal brutally with anyone who gets in their way. The law, of course, is also after Hicklin, and that includes a county sheriff who's well onto the downward slide into alcohol abuse and irrelevance. What follows from all of this is a gripping tale that will hardly warm your heart but which will certainly command your attention. Peter Farris writes beautifully about some very ugly activity and this debut novel heralds the beginning of a very promising career.
Posted by James L. Thane at 8:24 PM