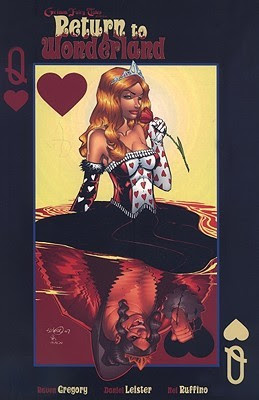 If you've ever read Alice in Wonderland and thought, "You know what this story really needs? More tits. And viscera. Tits and viscera for everyone!" then a) you are probably a 12 year old boy who butchers his neighbor's pets in his spare time and b) this collection is for you.

This is some dark stuff and, folks, I certainly don't mind dark stuff, but this is gratuitous with no cohesive storyline and a complete and utter lack of imagination (I say this because to take Alice in Wonderland and sex it up doesn't require any great creative power--just an unhealthy preoccupation with people's "naughty bits"). Basically, Alice's teenage daughter, Calie goes to Wonderland. Calie encounters exactly all of the same experiences her mother did, only they're all portrayed with a blatant lasciviousness: Calie's built like an inflatable doll and every scene is sexually charged by playing to as many fetishes as possible. And, as if that wasn't enough, it's as though the author is trying to cram as much shockfest violence, gore, and sexuality into the pages as possible. The narrative is so busy trying to shock us that the vignettes with the Mad Hatter, the Cheshire Cat, the Queen of Hearts don't serve a real purpose--they simply provide the next platform from which to blow our minds with how daring and edgy the story is. Yeah, well, we've got another name for being sexually daring and edgy without context and storyline: porn. Because that's really what this is, in a subdued form. Whether we're talking about the violence or the sex, it's playing to a certain type of unhealthy libido in a manner meant to arouse.

Back in the real world, Alice has attempted suicide multiple times and lives in a catatonic state. In the meantime, her husband is having an affair and not just any old affair. Oh, no. We wouldn't want to miss out on an opportunity to bring out the whips and chains, would we? So he's having an affair steeped in sadomasochism. And then there's Calie's brother who is exhibiting all the classic signs of a blossoming young serial killer. It's dysfunctional with a capital D, which seems a little overboard when coupled with the level of macabre that is present in Wonderland, too. For either Calie's reality or her Wonderland experience to be dark and twisted would be fine, but the two together is too much.
Posted by Amanda at 12:00 PM

Email ThisBlogThis!Share to TwitterShare to FacebookShare to Pinterest
Labels: Amanda, comics, The Hate