Reviewed by Kemper
3.5 out of 5 bullet riddled stars.

A couple of NYPD detectives respond to a call about a screaming naked man with a shotgun roaming the halls of an apartment building.  Surprisingly, it’s not Ted Nugent. 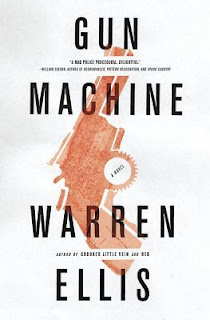 Unfortunately, John Tallow’s partner and only real friend is killed in the ensuing mêlée.  Afterwards, while the cops check the building for injured people, John makes a startling discovery.  Behind a high tech security door in one apartment are hundreds of hand guns arranged in intricate patterns on the walls and floors.  Initial ballistic tests indicate that each one was used in an unsolved homicide.  John has stumbled onto the trophy room of a very deadly killer who is slightly peeved that his life’s work has just been seized by the cops.

I haven’t read a lot of Warren Ellis’s comics, but I really enjoyed his extremely funny and twisted Crooked Little Vein.  This one certainly has an intriguing set-up for a story.  I also liked the character of John who is a smart cop but has essentially been coasting and letting his partner do the heavy lifting up until now.  John would rather just hole up in his apartment with his books and music rather than deal with people, and I think a lot of readers can relate to that.

Ellis’s portrayal of the Crime Scene Unit techs as a bunch of slightly hostile weirdos that have no great love for the cops was refreshing after being TV brainwashed that CSI is the greatest power in law enforcement.

While there’s a lot I liked, if felt just a little flat to me.  There’s an interesting idea in that everyone from his lieutenant to the CSU techs are pissed off at John for finding the room and essentially giving them all a bag of shit to hold.  However, I found it hard to believe the idea that everyone is just trying to shelve the case.  Except for one character very late in the book, no one mentions what kind of outrage would occur if it was discovered that the NYPD found a room full of murder weapons and just ignored it.  I don’t live in New York, but as I understand it, that would be the kind of story that the local media might find interesting.

I know Ellis wasn’t going for an ultra-realistic procedural here, so that could be overlooked, but I also wasn’t super thrilled with the ultimate resolution of the story.  Still, it was entertaining enough with a unique story and few dark laughs sprinkled in with the graphic violence.