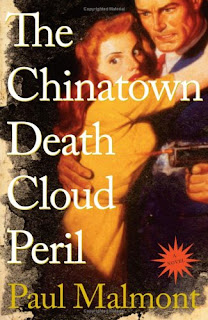 Published by Simon and Schuster

Prior to reading this novel, my experience with pulp fiction was limited to a Tarantino movie and a few stories I read as part of a Master's course in crime and detective stories. I came to the book with no knowledge about Walter Gibson or Lester Dent and no real interest in pulps. How much of the novel is true? I'd say about 1/4 truth, 3/4 pulp. But truth is not the point--the story is everything in this novel and, as the narrator says, "never let the facts get in the way of a good story."

Set during the height of the pulp fiction era, the novel follows Walter Gibson (author of The Shadow) and Lester Dent (author of Doc Savage), two titans of the time period. In addition, authors L. Ron Hubbard (pre-Scientology freakishness), H.P. Lovecraft, and Robert Heinlein all make appearances as characters (even Orson Welles shows up). The book is unique in that it doesn't try to serve as a biography of these characters. Instead, it pays homage to these authors by setting them in a sensationalistic pulp in which they are the protagonists--a fitting tribute to authors who thrilled so many with tales of courage and adventure, unspeakable horror, and plot twists and turns that would give the reader whiplash. The story is full of pulp hallmarks--dashing cowboys, Chinese assassins, beautiful women just bad enough to be good, a maniacal villain willing to stop at nothing to seek revenge (and maybe just rule the world while he's at it), a military secret that threatens society as we know it, zombies, and even a psychic with a chicken. There are train rides, boat rides, and plane rides. There's treasure, treachery, and romance. The book is fun, which was what the pulps were meant to be and, in some ways, isn't that more important than all the highbrow literary snobbery that purports to reflect on the human experience?

The last chapter was pitch perfect and there's a nice twist concerning the narrator of the story. The narrator laments the fact that "The pulps, the pages where American myths had been born, were gone" as "decency and morality oozed across the nation like black tar and old blood" (leave it to decency and morality to ruin a good thing). By the novel's end, I, too, mourned the heyday of the pulps and was glad I got to spend some time in one.
Posted by Amanda at 8:13 PM