God Save the Queen (of the Damned) 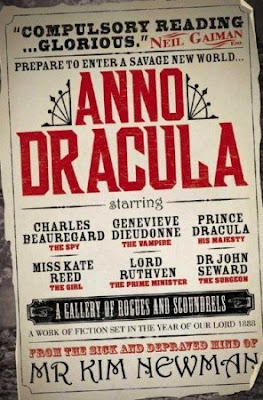 
In Victorian England, history has taken a peculiar turn: Queen Victoria has married Vlad Tepes, who has turned the Queen, restored her youth, and given her eternal life. With the Queen of England and her Prince Consort counted among the undead, it's not long before it becomes a fashionable choice, and even a political necessity, to embrace the Dark Kiss that brings immortality. High-born and low-born alike have renounced their "warm" lives in favor of the "red thirst." To accommodate the societal change, most business is conducted at night, silver is in restricted supply (hide grandma's tea service!), and humans increasingly find themselves in the minority. In the midst of this societal upheaval, a new threat has emerged as poor, eviscerated vampire prostitutes have been found in Whitechapel, "ripped" by a murderer with his own violent agenda. Welcome to A.D.--the year of our Dracula.

Anno Dracula is an inventive premise that eventually collapses under its own weight. Newman's novel builds upon a reimagining of events that occur in the wake of Bram Stoker's Dracula had it been history instead of fiction. In Newman's Victorian England, the hunt is on for the murderer known as "Silver Knife" until he is given a new moniker upon receipt of anonymous letters signed "Jack the Ripper." Turning the killing spree of Jack the Ripper into a hate crime against vampires is brilliant, but instead of being the axis of the book's action it serves only as a loose framework. We as readers know the identity of the killer within the first 20 pages, but this revelation never creates any real sense of dramatic irony. If anything, it lessens the suspense that could have been created by a tense manhunt through the streets of London. The characters purportedly brought in to track the murderer do little other than show up at the scene of the crime and discuss everything but Jack the Ripper. No one character seems truly invested in tracking the madman. In fact, it's possible to forget the Jack the Ripper angle for entire chapters as characters fall in love, fall out of love, and engage in all of the social duties expected of the upper class.

In regard to the large cast of characters, Newman has considerable fun weaving historical and fictional characters into the plot. Bram and Florence Stoker, Oscar Wilde, Mark Twain, Beatrix Potter, Sherlock and Mycroft Holmes, Mina Harker, and several Victorian societal and political luminaries either make appearances or are alluded to throughout. Even Lestat de Lioncourt makes a brief appearance as a foppish rebel against the Christians who denounce the rise of the undead. Now, initially this might sound like fun, but these characters make appearances so brief that they don't really add anything to the narrative. It's name-dropping in lieu of a clever conceit; basically, it's the literary equivalent of spotting Angelina Jolie in a crowded airport, snapping a photo as she whisks through the terminal, and then boring everyone for the rest of your life with a photo of the back of her head. And, in grandiose terms, you shall forever refer to this event as "the day I met Angelina Jolie."

The book is not entirely without its merits and I can certainly see where hardcore Dracula fans or Victorian Era Anglophiles would enjoy the hell out of this. As for me, it was a marvelously ingenious idea that ultimately felt as cold and stiff as a vampire sleeping it off in his crypt. The absence of Dracula until the last 20 pages also added to the disappointment and, while the scene in which Genevieve and Charles finally visit the vampire court is horrifically twisted, I was disappointed in the anticlimactic ending that was over with too quickly and easily.
Posted by Amanda at 8:00 AM