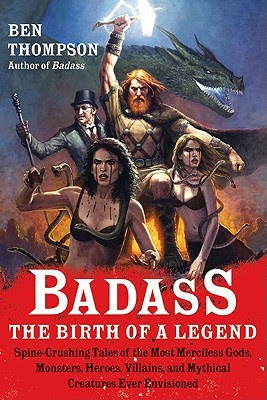 Badass:  The Birth of a Legend

Reviewed by Amanda
3 Out of 5 Stars

Behold!  Herein is contained a collection of history and pop culture's most notorious badasses.  These guys and gals kick ass, take names, never give a crap, and spend their days punching humanity in the nutsack just because they can.  They believe that, if you're looking for sympathy, it's in the dictionary between shit and syphilis.  There's no challenge they won't accept, no life they will spare, no vengeance they won't seek, no maiden they won't fondle!  Why?  They all suffer from the totally sweet fever known as badassitude.  And, as we all know, there's no cure for badassitude and, even if there were, who would want it?

Yeah, was all that a little too much for you?  Well, it was for me, too.  I will readily admit that I am indeed juvenile enough to have found the cover amusing, as well as sentences like this one describing the Egyptian gods: "As an added triple-shot of one hundred-proof badassitude, almost all of these bitchin' all-powerful smite-masters were represented by human bodies with insane animal heads grafted on top, making them so King Kong mega-weird-looking that it's like riding a surfboard of insanity down the Uncanny Valley."  However, 300+ pages of this became tedious--so much so that I had to reduce my reading to a chapter or two between other books.

It wasn't long before every chapter began to sound as though a potty-mouthed version of Teenage Mutant Ninja Turtles' Michelangelo was "Cowabunga"-ing his way through the narrative.
However, there were some bright spots:

1)  The variety of cultures and time periods represented is impressive.  We have everything from Viking, Aztec, Greek, Egyptian, Vodoun, Anglo-Saxon, to various African mythologies represented, as well as more modern cultural icons.  (Any book where Skeletor and Darth Vader are rubbing shoulders is automatically worth 3 stars.)

2)  Hell, yes for the women represented in the book!  Kali, Oya, Atalanta, Bradamant of Clairmont, Skuld, The White Tights (it's worth reading this chapter alone), The Furies, Baba Yaga, and, my personal favorite, Medea, are all here, proving you don't have to have *ahem* a sword *ahem* to be a badass.

3)  This is the type of book that I could definitely see turning around a boy who is a struggling reader.  It's fun, opens up a variety of mythologies for further research, and uses a language all teenage boys understand.  Sure, you could get your panties in a twist because words like balls, douche, badass, scrotum, and several juvenile sexual references are made, but if you think teenage boys aren't already using that language then you are not a badass.  You're a dumbass.  And I'm of the opinion that if it takes pandering to the lowest common denominator to hook a kid on reading, it's well worth it.

Despite the fact that the "badass" conceit wears pretty thin, this is a moderately entertaining and very well-researched read.  I can honestly say that I learned a few things from it, added a few books for further reading to my "to read" list, and now have the line "He gets more ass than a public toilet seat" in my arsenal.  It was well worth the read.
Posted by Amanda at 8:47 AM