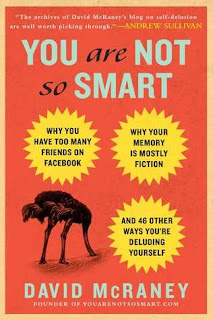 
Turns out everyone thinks they are somehow smarter than the people around them, everyone.  We all are guilty of it.  We walk into a Wal-mart, take a look around us and think “what a bunch of freaks, and always in Wal-mart” …..But we are also in Wal-mart as we make this judgment.  I don’t go into that store unless they are the only option, but every time I look around and I think to myself “do I also look like a freak by just entering this store, then magically go back to normal when I leave?”
I once thought that I had free will and nothing that Sam Harris wrote proved otherwise, but David McRaney may have done just that.  Nothing we do as humans have anything to do with individual choice.  We are all manipulated by the media and a bunch of biases and fallacies.

Here are a couple of examples of this…….

The Misconception: Your opinions are the result of years of rational, objective analysis.

So, this wasn’t news to me.  I am not ever going to watch Faux News for any reason, unless I had a job that forced me to do it.  Skeeter, down the street would rather eat an arugula salad before watching Rachel Maddow for ten seconds.   We are only going to pay attention to the things that confirm our beliefs……this explains the existents of Rush Limbaugh.  That being said, I’m right and Skeeter is not.

The Misconception: If you stop engaging in a bad habit, the habit will gradually diminish until it disappears from your life.

The Truth: Any time you quit something cold turkey, your brain will make a last-ditch effort to return you to your habit.”

Yeah, anyone who has dieted (most probably everyone, unless you are one of those skinny people who “just can’t seem to gain weight”…..everyone hates you) has experienced this.  You are going along well, you are hitting your goals….you hit a plateau or life gets in the way and you break from the diet a little.  Before you know it you are back to eating the stuff you really shouldn’t.  This is due to the ‘extinction burst’.  Food tastes good, some food tastes better than others and since we evolved to survive we are hard wired to crave high calorie food because that is what determined life or death.  Ironically, that’s what’s killing us today.   When a reward is taken away from us, we throw a fit…….but if we still don’t get the reward we give up.  That’s why you never give in to a two year old during an extinction burst.

The Misconception: People who are losing at the game of life must have done something to deserve it.

The Truth: The beneficiaries of good fortune often do nothing to earn it, and bad people often get away with their actions without consequences”

This is a big one.  All those people who believe that poor people are poor because they want to be and/or are not pulling themselves up by their bootstraps because they just want to live easy off the system and have no idea how to work hard, these people are fooled by this fallacy.  Never, do they take into account their own fortunate beginnings as the reason they themselves are not amongst the poor.  The reason they are not poor is not only because they worked really hard (I’m not saying they didn’t work hard, and that is a big part of sucess), but they are not poor because they didn’t come from poor most likely.  Many people have risen above their poor beginnings (Ben Franklin) but it’s a very hard cycle to overcome.

The Misconception: If you are in a bad situation, you will do whatever you can do to escape it.

The Truth: If you feel like you aren’t in control of your destiny, you will give up and accept whatever situation you are in.”

This is all about having some control in your life.  If all choice is taken away from a person they tend to give up.  Residents in nursing homes do better if they get to choose how to arrange their furniture than those who have everything done for them.  If you are living in a bad situation and you don’t have any control over what happens to you, you don’t have access to higher education because it is financially out of reach.  No one will give you a job no matter how hard you try because you aren’t dressed nice enough, and you don’t have enough education…….these people will accept their situation most likely than not.

This book was very interesting.  But I’m feeling a little down because I learned that I am not so smart and I am not that special.

Thanks David for the depression…..*sigh*

All kidding aside, I really enjoyed this book.  Here’s a website if you would like to read more.

You are not so smart


As seen on goodreads
Posted by stephanie at 12:44 AM